My Journey Toward Loving Myself at Any Weight 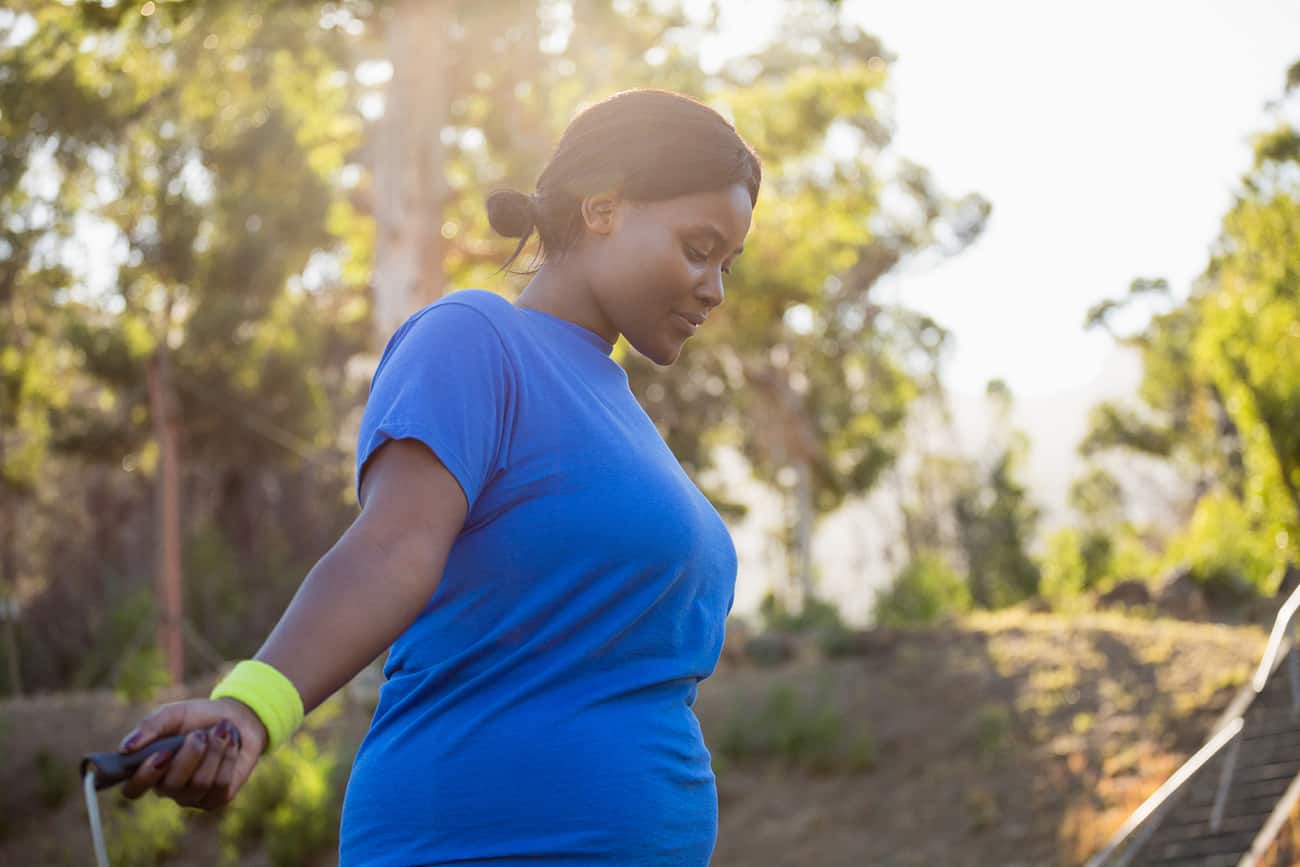 The highest weight I’ve ever been is something I never care to revisit—however, I’ve learned to love my body image no matter what the number is on the scale.

I’ve been just over 300 pounds and just under 200 pounds and everything in between. As I’ve journeyed in between those 100 pounds, I’ve learned a lot about myself.

Most importantly, I’ve learned to love myself no matter what the number says on the scale. There are days I struggle (and I mean truly struggle!) with appreciating me for me, but I know as long as I’m healthy that’s all that matters.

Here is just a brief glimpse into my journey with the scale.

I spent my childhood getting stuck in Lane Bryant dresses. In grade school, the boys in my class used to make fun of me that my butt wouldn’t fit on the small, child-sized seats. My seventh grade bathing suit consisted of a leopard print one-piece with a bust minimizer purchased from the Macy’s plus-sized women’s department—not exactly something a 12-year-old would be happy about.

I vividly remember one particularly snowy October my soccer team was losing by one goal. My coach chose to put me in as goalie and the other team’s girls were teasing me relentlessly saying “You’re putting HER in goal?” Thank God that time, my uncoordinated self blocked a kick and we made it downfield to win.

However, there was still high school when I wore size 30 tapered khakis for our school uniform instead of the flared versions most of my friends had. I rocked gold lamé pants and red velvet ones too. Both were from Lane Bryant before they started selling trendier clothes.

My freshman year of college, I decided not to walk about a mile to the grocery store with this guy I had a crush on. Every time we all took a trip to the mall, I longed to try out a Victoria’s Secret bra. Too bad most clothing manufacturers don’t understand that while you may have a large band size, cup size isn’t necessarily always large!

Years later, you know those little pictures that pop up on the side of your Facebook page? I used to hate them. I never used to like those pictures because people would see them and immediately say, “Wow you lost so much weight! How did you do it?” 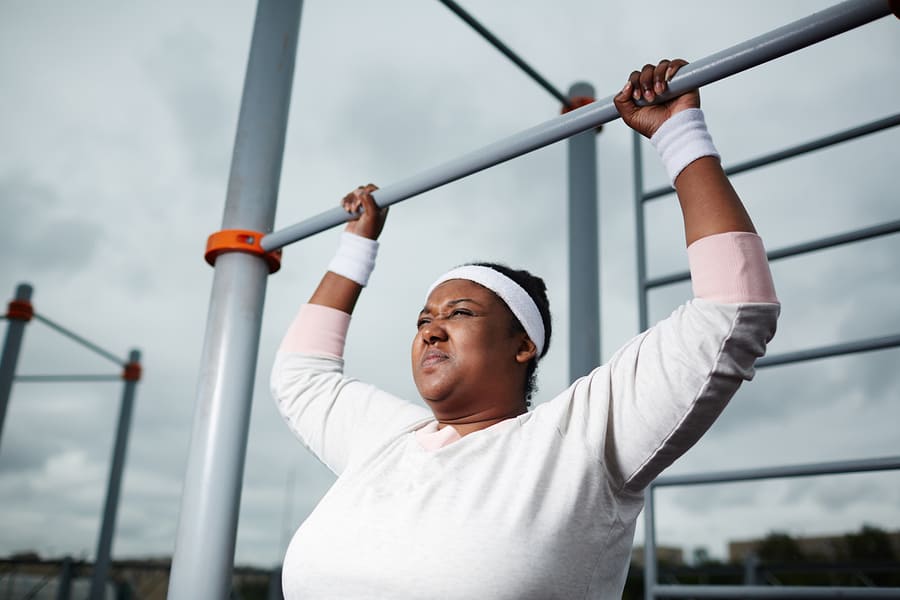 Anyway, the whole weight loss thing started off as sort of an accident then grew to something a little more inspiring. When I started my freshman year of college, I automatically began walking more and the weight began to slowly come off. However, I still prided myself on never setting foot in my university’s fitness center. I was stubborn and always told my friends I was fine with being the biggest among us, or perhaps dating a guy who weighed less than me.

My senior year when the girls I lived with were giving me trouble, I began taking long walks to clear my head. Pounds began shedding a little more easily and I was hooked on the results.

This brings me into all my fat girl neuroses. I had always had a thing about going to gyms. I used to think everyone would be staring at the fat girl walking into the gym, wondering why she was there. That’s why I invested in two DVDs by the great Richard Simmons.

I kept this a secret for many weeks from my friends, but they found out quite easily. Let’s just say being friends with two boys really gives you a thick skin. It became such an ongoing joke that one of them sent me an “I party with Richard Simmons” t-shirt.

All that chorus line kicking and self-loving Richard professed in Sweatin’ to the Oldies did have its advantages though. I got down to a size 20 without even setting foot in my apartment building’s tiny overcrowded gym. This was accompanied with getting off the bus earlier and walking a few extra blocks to work and taking the stairs to my seventh floor apartment.

The other neurosis I had (and still have occasionally) involves going out to eat with friends. I would freak out if one male friend preferred a salad to French fries with his burger and constantly worried I’d be seen as “fry girl”—you know, the stereotypical fat girl munching on fries to no avail.

At one point, I only ate half of a cheeseburger I was so scared I looked bad. Now, I realize how incredibly ridiculous I was and I now know one cupcake here and there won’t hurt.  Sometimes, you just have to give in to your cravings.

Then one night, I did it. I couldn’t believe I worked up the nerve to walk downstairs. My old building had a gym in the basement and I don’t know what possessed me to go downstairs but I did. I sat on the exercise bike and made it all of 20 minutes before stopping. I cranked up my iPod and tried my darnedest not to let even one thought about the other people in the gym get to me.

As much as I wasn’t sure if I wanted to continue, I knew I had to do it. Pretty soon, I was not only walking on the treadmill but navigating the elliptical and Stairmaster too. I moved apartments the following winter and I soon became a regular at my new building’s downstairs fitness center. 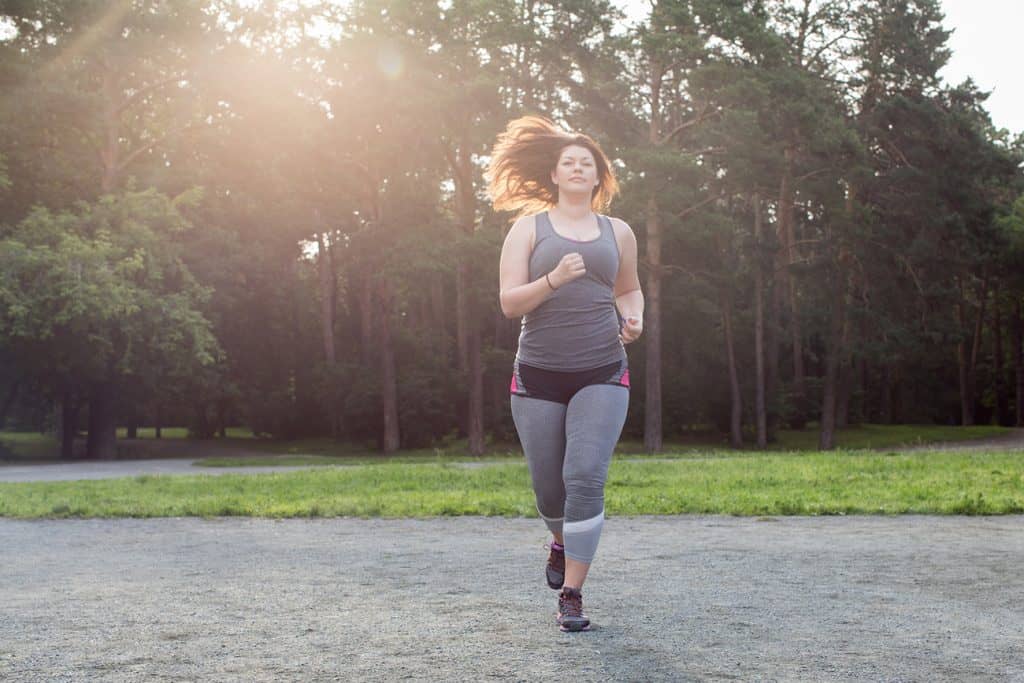 My lunches I packed for work got lighter and I became a fan of things I never in my wildest dreams thought I’d be eating—Greek yogurt, fresh fruit, granola. The crazy thing is, I found that I actually liked those foods. You also won’t believe it but it’s not that hard to not want to go back to greasy foods like pizza (although I definitely splurge a lot of weekends).

The first spring I was at my new building, I began jogging outside. My friends were shocked that I was exerting myself while on display to the thousands of people on my busy street.

You know what’s the crazy part? How all the women’s magazines I’m obsessed with, all the trainers and athletes, they’re all actually right about something—jogging is a huge stress reliever for me. The most I’ve ever jogged at once is about four miles but the decisions I’ve made, anger I’ve lessened and happiness I’ve achieved while pounding the pavement is countless.

I’ve always been a big lover of holidays and celebrations so naturally I had mini-celebrations with myself during all my weight loss milestones. When I lost 50 lbs, I celebrated with a slice of Cheesecake Factory cheesecake. When my size hit the teens, it was a shopping spree at the nearby Gap.

But story didn’t end here either.

Crunch Gym opened up a franchise near my apartment and I became intrigued and instantly had to join.

There was this one class, “The Athlete’s Workout,” that I took one evening. It was a warm and humid day outside and the instructor chose to take the class outdoors. My instinct told me to run far away from the situation but I told myself no.

An hour later, I’d run suicides, did Army crawls and did enough lunges that my legs felt like Jello. With dirt on my cheeks and my messy ponytail becoming undone, I practically skipped the three blocks home.

I remember wishing my grade school and high school teachers could see me now. Decades ago, I was the kid who walked the mile run, or continually moved to the back of the kickball line so I didn’t have to take a turn. Occasionally, I’d hide behind the church convent to avoid running.

Just over 10 years later, I’ve gained back some of the weight I’ve lost. I’m still proud to say I’m 60 pounds lighter than I was in high school. As a freelance writer and piano teacher to 22 kids and two adults and caring for a very needy English bulldog, life is busier than it was when I was working at a newspaper. I still try to get to my apartment’s gym three or four days per week and we have a gorgeous trail right near our apartment that I love to walk and jog on in the spring and summer.

My food choices have their good and bad days, but I know that it’s important that I am healthy. I know my “numbers” as the doctors say, and while I’ll always have to be careful, I know that I am doing okay. I’ll never be a size 2. Honestly, at 5’11” that wouldn’t look all that natural anyway!

My relationship with my weight will always be a struggle. I still think about most food that goes into my mouth and weigh myself often, if only to keep myself in line. It’s absolutely pivotal to remember that I am still the same person inside as I always was, no matter what the scale says. I’m still obsessed with chick lit novels and romantic comedies. I love entertaining friends at my apartment and hosting parties that revolve around the holidays.

I’ve finally realized what’s five or 10 lbs. gained or lost here and there? As long as I am healthy and happy that’s all that matters. Writing about my weight loss so personally for the first time has definitely opened up my eyes to what I’ve accomplished and the fact that I should be excited about what I’ve done. If anything I’ve become so much more active than I was at 16 and 17, even 21. Why hide something that I should be proud of, right? Oh and those gold lamé pants? I can fit my whole self in one pant leg now.

Interested in reading more about self love? Check out this piece from 2016 on how you can achieve self love faster than you think. If you want to join us in more positive and affirming wellness information, join LOVE TV!

My Journey Toward Loving Myself at Any Weight