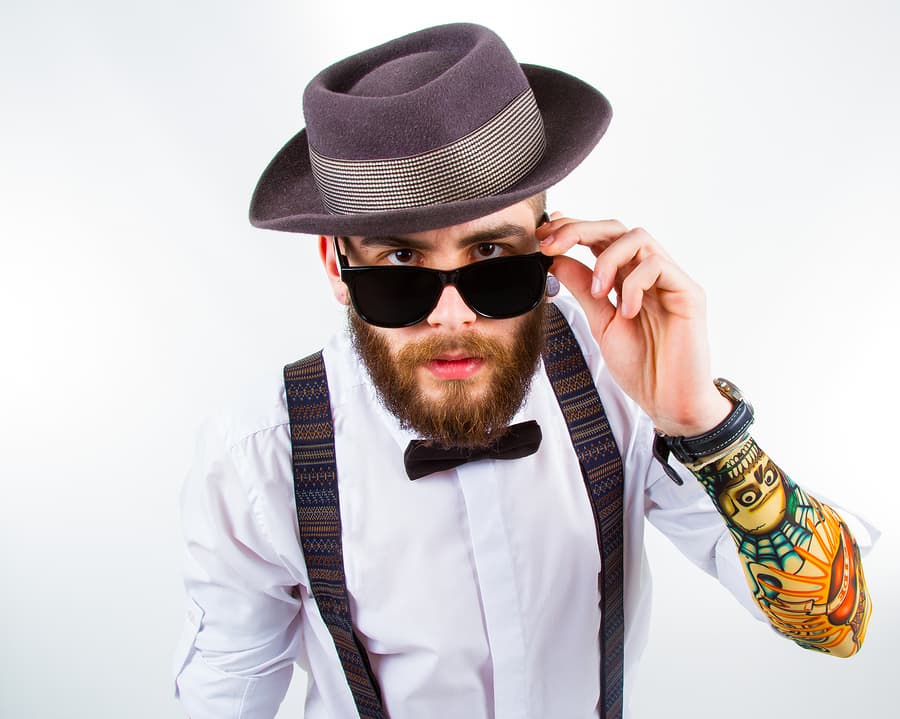 With so much research showing that young males suffer beneath the gravity of conventional masculinity, why isn’t there more help for them on campus?

Last semester, a student in the masculinity course I teach showed a video clip she had found online of a toddler getting what appeared to be his first vaccinations. Off camera, we hear his father’s voice. “I’ll hold your hand, O.K.?” Then, as his son becomes increasingly agitated: “Don’t cry!… Aw, big boy! High five, high five! Say you’re a man: ‘I’m a man!’ ” The video ends with the whimpering toddler screwing up his face in anger and pounding his chest. “I’m a man!” he barks through tears and gritted teeth.

The home video was right on point, illustrating the takeaway for the course: how boys are taught, sometimes with the best of intentions, to mutate their emotional suffering into anger. More immediately, it captured, in profound concision, the earliest stirrings of a male identity at war with itself.

This is no small thing. As students discover in this course, an Honors College seminar called “Real Men Smile: The Changing Face of Masculinity,” what boys seem to need is the very thing they fear. Yet when they are immunized against this deeper emotional honesty, the results have far-reaching, often devastating consequences.

Despite the emergence of the metrosexual and an increase in stay-at-home dads, tough-guy stereotypes die hard. As men continue to fall behind women in college, while outpacing them four to one in the suicide rate, some colleges are waking up to the fact that men may need to be taught to think beyond their own stereotypes.

In many ways, the young men who take my seminar — typically, 20 percent of the class — mirror national trends. Based on their grades and writing assignments, it’s clear that they spend less time on homework than female students do; and while every bit as intelligent, they earn lower grades with studied indifference. When I asked one of my male students why he didn’t openly fret about grades the way so many women do, he said: “Nothing’s worse for a guy than looking like a Try Hard.”

In a report based on the 2013 book “The Rise of Women: The Growing Gender Gap in Education and What It Means for American Schools,” the sociologists Thomas A. DiPrete and Claudia Buchmann observe: “Boys’ underperformance in school has more to do with society’s norms about masculinity than with anatomy, hormones or brain structure. In fact, boys involved in extracurricular cultural activities such as music, art, drama and foreign languages report higher levels of school engagement and get better grades than other boys. But these cultural activities are often denigrated as un-masculine by preadolescent and adolescent boys.”

Throughout elementary school and beyond, they write, girls consistently show “higher social and behavioral skills,” which translate into “higher rates of cognitive learning” and “higher levels of academic investment.”

It should come as no surprise that college enrollment rates for women have outstripped men’s. In 1994, according to a Pew Research Center analysis, 63 percent of females and 61 percent of males enrolled in college right after high school; by 2012, the percentage of young women had increased to 71, but the percentage of men remained unchanged.

By the time many young men do reach college, a deep-seated gender stereotype has taken root that feeds into the stories they have heard about themselves as learners. Better to earn your Man Card than to succeed like a girl, all in the name of constantly having to prove an identity to yourself and others.

The course “Real Men Smile,” which examines how the perceptions of masculinity have and haven’t changed since the 18th century, grew out of a provocative lecture by Michael Kimmel, the seminal researcher and author in the growing field of masculine studies.

Dr. Kimmel came to my campus, Towson University, in 2011 to discuss the “Bro Code” of collegiate male etiquette. In his talk, he deconstructed the survival kit of many middle-class, white male students: online pornography, binge drinking, a brotherhood in which respect is proportional to the disrespect heaped onto young women during hookups, and finally, the most ubiquitous affirmation of their tenuous power, video games.

As Dr. Kimmel masterfully deflected an outpouring of protests, the atmosphere grew palpably tense. A young man wearing fraternity letters stood up. “What you don’t get right is that girls are into hooking up as much as we are; they come on to us, too,” he said. Dr. Kimmel shook his head, which left the student clearly rattled.

His voice quavering, the young man stammered something unexpected from a frat brother, about how women can be as insensitive and hurtful as guys. He sounded like a victim himself. But afterward, when I asked him if he had reached out to any of his guy friends for advice or solace, he stared at me, incredulous, his irises two small blue islands amid a sea of sclera. “Nah, I’ve got this,” he said.

I wanted the course to explore this hallmark of the masculine psyche — the shame over feeling any sadness, despair or strong emotion other than anger, let alone expressing it and the resulting alienation. Many young men, just like this student, compose artful, convincing masks, but deep down they aren’t who they pretend to be.

Research shows what early childhood teachers have always known: that from infancy through age 4 or 5, boys are more emotive than girls. One study out of Harvard Medical School and Boston Children’s Hospital in 1999 found that 6-month-old boys were more likely to show “facial expressions of anger, to fuss, to gesture to be picked up” and “tended to cry more than girls.”

“Boys were also more socially oriented than girls,” the report said — more likely to look at their mother and “display facial expressions of joy.”

This plays out in the work of Niobe Way, a professor of applied psychology at New York University. After 20-plus years of research, Dr. Way concludes that many boys, especially early and middle adolescents, develop deep, meaningful friendships, easily rivaling girls in their emotional honesty and intimacy.

But we socialize this vulnerability out of them. Once they reach ages 15 or 16, “they begin to sound like gender stereotypes,” she writes in “Deep Secrets: Boys’ Friendships and the Crisis of Connection.” “They start using phrases such as ‘no homo’ … and they tell us they don’t have time for their male friends, even though their desire for these relationships remains.”

As women surpass men on campus, the threat felt by thin-skinned males often reveals itself in the relationships where they feel most exposed. “Boys are not only more invested in ongoing romantic relationships but also have less confidence navigating them than do girls,” writes the sociologist Robin W. Simon in The Journal of Health and Social Behavior. That’s problematic, because “romantic partners are their primary sources of intimacy,” whereas young women confide in friends and family.

Some cultural critics link such mounting emotional vulnerability to the erosion of male privilege and all that it entails. This perceived threat of diminishing power is exposing ugly, at times menacing fault lines in the male psyche. Experts point to sexual assaults on campus and even mass murders like those at a community college in Oregon and a movie theater in Colorado. These gunmen were believed to share two hypermasculine traits: feelings of profound isolation and a compulsion for viral notoriety.

With so much research showing that young men suffer beneath the gravity of conventional masculinity, men’s studies is gaining validation as a field of its own, not just a subset of women’s studies. Hobart and William Smith Colleges has offered a minor in men’s studies since the late ’90s. The Center for the Study of Men and Masculinities was established in 2013 at Stony Brook University, part of the State University of New York, and plans to offer its first master’s degree program in 2018. Last year, the center hosted the International Conference on Men and Masculinities, where topics included fatherhood, male friendships and balancing work and family life.

So why don’t campuses have more resource centers for men?

Some universities offer counseling services for men of color and gay men, and some sponsor clubs through which male members explore the crisis of sexual violence against women. Only a precious few — the University of Massachusetts and Simon Fraser University among them — offer ways for all men to explore their shared struggles. And these don’t exist without pushback. Talk of empowering men emotionally yields eye rolling at best, furious protest at worst — as when the Simon Fraser center was proposed, in 2012, and men and women alike challenged the need for a “safe space” for members of the dominant culture.

But wouldn’t encouraging men to embrace the full range of their humanity benefit women? Why do we continue to limit the emotional lives of males when it serves no one? This question is the rhetorical blueprint I pose to students before they begin what I call the “Real Man” experiment.

In this assignment, students engage strangers to explore, firsthand, the socialized norms of masculinity and to determine whether these norms encourage a healthy, sustainable identity.

The findings result in some compelling presentations. One student interviewed her male and female friends about their hookups and acted out an amalgam of their experiences through the eyes of a male and a female character; another explored the pall of silence and anxiety that hangs over campus men’s rooms; two students gleaned children’s gender perceptions in a toy store. One of the most revealing projects was a PowerPoint by a student who had videotaped himself and then a female friend pretending to cry in the crowded foyer of the university library, gauging the starkly different reactions of passers-by.

“Why do you think a few young women stopped to see if your female friend was O.K.,” I asked him, “but no one did the same thing for you?”

He crossed his arms, his laser pointer pushing against his bicep like a syringe, and paused. Even at this point in the semester, the students, some of whom had studied gender issues before, seemed blind to their own ingrained assumptions. So his response raised many eyebrows. “It’s like we’re scared,” he said, “that the natural order of things will completely collapse.”