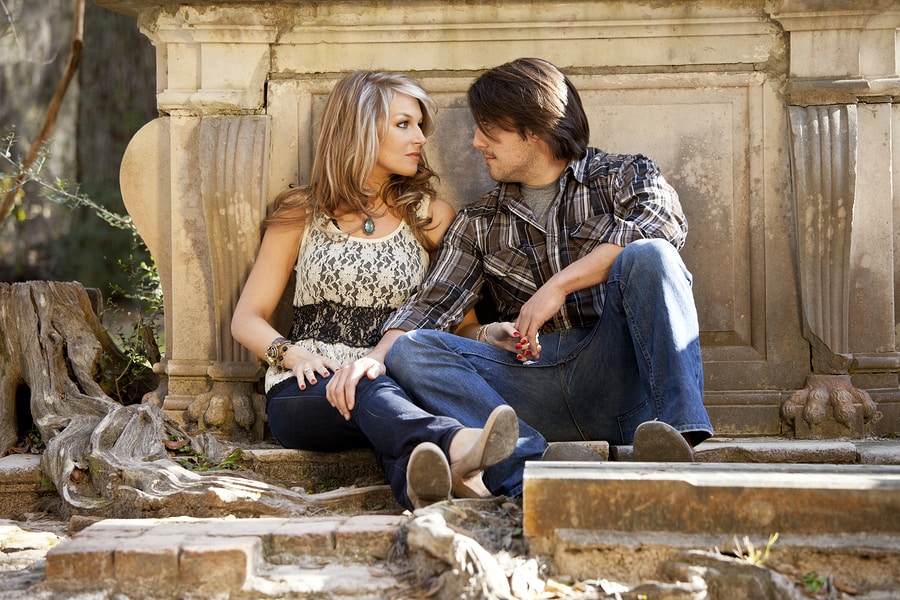 After a long stint of online dating, Gemma Halliday had finally found the needle in the haystack she’d been looking for: an attractive, gainfully employed guy with “nothing weird or scary about him” — or so she thought.

“He seemed really nice,” the 31-year-old romance novelist from Los Gatos, California, says of her first phone call with the suitor. He even had “cereal-commercial cute” kids and a picture-perfect home. Halliday learned something else, too.

The man also had a wife — who was in a coma.

“At first I was a little shocked,” Halliday says. “It was very ‘Desperate Housewives.’ In the back of my mind it was like, ‘What happens if she wakes up?’ ”

When to drop the bomb

As strange as the news was, Halliday appreciated his honesty. “Had he waited to tell me, I would have felt he was hiding something,” she says.

Undeterred, she decided to meet the guy for a coffee date, but as it turned out, “the chemistry just wasn’t there,” she says.

But for other daters with secrets — a history of sexually transmitted diseases, a conviction for drunken driving, an obsession with “Star Trek” — the tell-and-then-kiss approach doesn’t necessarily work.

Take Tony Gilbert, 46, from Los Angeles. Throughout his 20s and 30s the body-care products salesman suffered from severe psoriasis, a red, scaly skin condition that covered 20 percent of his body. Besides the itching and discomfort, there was the painful matter of having to tell a date that things might look a little “unsightly” but that “it’s not contagious.”

Rather than share those details over an initial cup of coffee, “I got to know [the person] first, and if I thought we might get intimate, I would tell them,” says Gilbert, who is now married and completely psoriasis-free, thanks to medication he has been taking for five years.

Good decision, says Kimberly Flemke, a therapist on staff with the Philadelphia-based Council for Relationships, a nonprofit relationship-counseling group.

“If you have a big secret, you want to have that trust established first so you know that the person is going to honor your privacy,” she says. “You can’t do that in a new relationship because you don’t know the other person yet.”

How soon is too soon?

Besides, waiting to reveal a potential deal breaker such as herpes or $300,000 in credit-card debt is just good dating decorum, says syndicated sex columnist Dan Savage, author of “The Commitment: Love, Sex, Marriage, and My Family.”

“You don’t want someone to reveal too much at first because that itself is a deal breaker,” he says. “If somebody sits down on the first date and says, ‘I’m into spanking,’ even if you are into spanking, [too], you might react negatively to that.”

On the flip side, “withholding information like ‘I’m a cross-dresser’ till the wedding night” is bad form, he says. Once you’re seeing the person a few times a week and sleeping together, it’s time to come clean about any secrets that could affect the relationship.

Even then, Flemke says, there are no guarantees your secret will be met with open arms.

Jude Chosnyk, a 48-year-old technical writer from Seattle, can attest to this. Once she became sexually involved with her then-boyfriend, he revealed that he thought he was “a woman in a man’s body” and began wearing women’s underwear and stockings to bed.

“At first I thought it was a fantasy thing,” says Chosnyk, who didn’t mind a little role-playing. But then, “it kind of overtook the relationship, especially in the bedroom. It turned me off, and that’s why I broke up with him.”

When spilling the beans, giving your secret a bit of context can greatly help your case, Flemke says.

“Instead of dropping a bomb and watching the person sit there and absorb the information, say that if you didn’t see the relationship going somewhere, you wouldn’t have said anything,” she explains.

It’s perfectly acceptable to tell your partner you’re nervous about how your big reveal might impact the relationship, she adds. That way, your partner’s likely to have “a little more compassion and empathy.”

Caitlin Weaver, 29, is banking on this.

After breaking off her engagement to her fiancé and canceling the wedding earlier this year, Weaver, who runs a financial research institute in New York, started an anonymous blog about her newfound singledom.

“The idea was to chronicle my commitment to staying single for six months,” she says. “But the problem is that now I have started dating someone, and I’ve been blogging about him.”

Her solution? To stop blogging about her boyfriend (although she still blogs about other aspects of her life) and fess up that she did. “We weren’t serious when we started dating,” says Weaver, who has been with her beau a couple of months and hopes the back story — that she started her blog as a way to “process” how she feels about dating — will help soften the blow.

“I think the fact that I do want to tell him means that we’ve built up some trust,” she says. Now, “it’s just a question of if the blog is a big deal to him.”