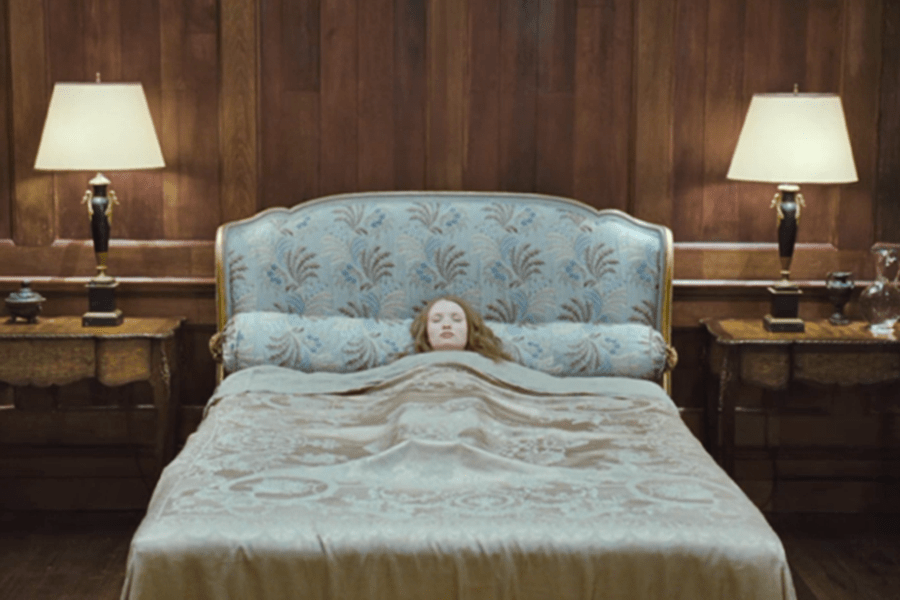 Are you sleeping through power and consent dynamics?

Leigh has interesting things to say about who wields the male gaze, power and consent.

This scene isn’t sexy (though of course some might disagree), but it tells the audience some key concepts. First, the facts about Lucy’s personality: Loner. Passive. Emotionless. We see how these traits play out in her future. Then there’s the power and sexual dynamics at play: Lucy, the woman, receives from the man, who gives. Throughout the film, these dynamics twist and turn, fighting for supremacy.

Lucy works odd jobs and, like many a broke college student, is always on the lookout for extra cash. She answers a want-ad, and meets with Clara (Rachael Blake), the madam of the operation. Lucy’s job will be to provide silver service (essentially, high-end waitressing) for rich clients, working in a team with other girls. And she does this a few times. After she’s proven herself, Lucy is offered a more lucrative gig: Sleep in bed for one night while a male client can do anything he likes with her, except no penetration and later, leaving no marks on her body.

This film displays its sensuality openly. Leigh has interesting things to say about who wields the male gaze, traditional sexual politics, and consent.

When Lucy arrives for an initial interview with Clara, Clara asks after her health and then asks Lucy to strip down to her bra and underwear. Clara’s male assistant then lightly runs his hands over Lucy’s body, with Clara watching from the side (after lightly cupping Lucy’s breast). Lucy remains motion- and emotionless during this inspection, passive to the end.

Any woman has probably felt the way Lucy felt in this moment: frozen to the spot while being visually dissected. But the other male gaze in the room comes from a woman: Madam Clara eyes Lucy keeping in mind what her clients will like. It adds an unexpected energy and another dimension to the scene.

Once Lucy consents to the sleeping gigs, another sexual dynamic plays out. Lucy, while sleeping, is completely passive (which was her choice, as she took the job). This point is hammered home by the men who pass through the bedroom and are curious to see just how “asleep” this beautiful girl is. They push the boundaries: yelling at her, roughly moving her body around, one even burning her with the lit end of his cigarette. It can be hard to watch. Violence can be the flip side of sexual expression, and the two are closely linked in this film.

Lucy’s final action of the film is screaming hysterically, due to an unexpected event. It’s a significant moment: It’s the first time we see Lucy experience such intense emotion, that she makes the choice to feel something. It also happens right when she wakes up. It’s an apt metaphor for the film itself: After being thrust into a world where nontraditional sexual and power dynamics are the norm, you’re thrown back into reality. The dream is gone, and it’s time to wake up.