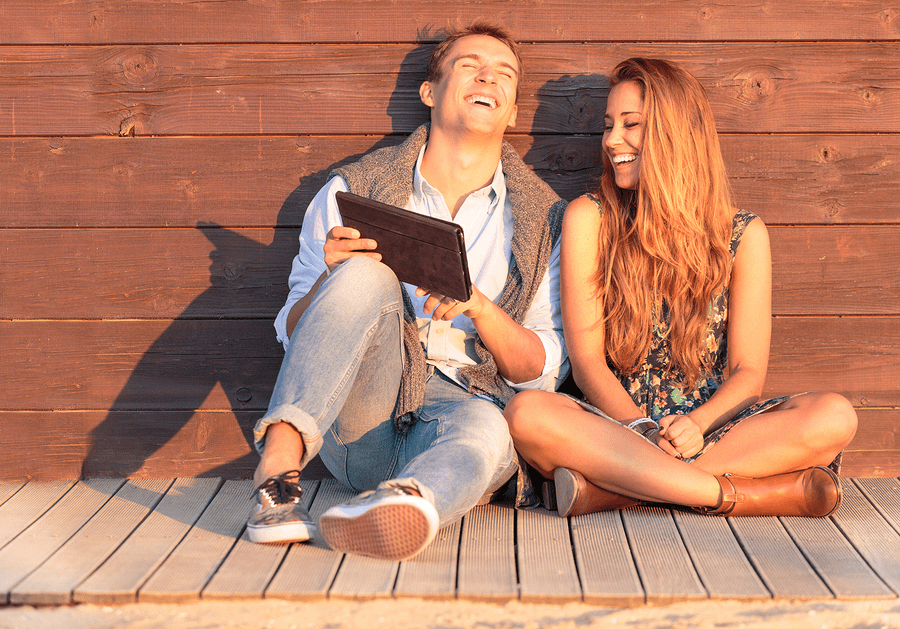 I blame it on my grandparents.

I think I’ve always had an idealized image of love and relationships. Part of the blame goes to Hollywood, with romantic comedies being a staple of my childhood. But I place the rest of the blame on my grandparents. They were high school sweethearts and were still completely and totally in love with each other. They would go on walks together every morning. Run their daily errands together. Watch Jeopardy together. Their days were spent, side by side, and the mundane errands never seemed to be mundane to them. I assumed it was simply because being together was joy enough. One of my favorite things they had hung up on their fridge, next to the artwork from me and my brothers and sisters and cousins, was a “Love Is…” comic strip by Kim Casali that said “Love is Having Someone to Hug.” Just like their relationship, it was simple, sweet and perfect. It was exactly what I wanted.

I clung to this notion of the perfect relationship desperately and because of these firm convictions and my stubbornness, I didn’t date in high school or college. I rarely even considered it. Though I would develop crushes, they never panned out, because as soon as I found a flaw, I would end it. If I couldn’t imagine growing old with him, taking a morning stroll together, it was over before it began and I would wonder why I was still without love. I remember one guy in my photography class in college; he had long hair and I felt a connection with him immediately. He was nice and seemed smart; there really was nothing wrong with him! I sensed that he liked me, but when he asked me out I declined. I had somehow convinced myself that he was pretentious. Another guy I went on a couple of dates with was a little too short for my liking…The thing is, I’m 5’1 so why would I bother being so picky about a vertical challenge that I suffered from too?!

Other times I would develop crushes on guys who were clearly disinterested. One crush in particular was on and off for 3 years. This is just way too long, but you can’t help your emotions. I had no reason to develop a crush on this guy. We barely ever spoke. He was shy. I was shy. He was from my hometown and I would only see him when I returned home from college for the summer and holiday breaks. Because of our lack of communication, I was able to create this long, unspoken, but deep connection between us. I call this the crush method form of protection. For someone who wanted a relationship, but didn’t really want a relationship, the crush method was perfect and non-threatening. Without any actions, there could be no consequences. Looking back, however, I realize these crushes were just another way of protecting myself from a committed relationship. I was letting fear decide my fate. Why take a risk on a relationship, I thought, if it wasn’t going to last? My mom would tell me that I was too picky and had my standards set too high. Although part of me knew this was true, I was unwilling to let go of the idea of a perfect romance.

By the time I was in my mid-twenties, I still hadn’t had a serious relationship. I started to feel embarrassed and worried that love just wasn’t in the cards for me. I was on all the dating apps and sites, to no avail. I was ready to give up and resign to a life alone until I realized that maybe, just maybe, my mom was right. Perhaps I was being too picky. It was time to lower my unrealistic expectations. But if let go of my standards, would I also have to let go of my idyllic, romantic notion of love? I was willing to give it a shot, but had a feeling it would prove difficult. After all, this was a belief that I was practically born with.

Fortunately, I quickly realized that this wasn’t a notion I had to let go of. What I did have to let go of was taking dating so seriously. By doing so, I was setting unrealistic expectations that every date would/should end in a lasting relationship. It wasn’t until I started dating for the fun of it, rather than finding the absolute perfect person, that I was able to find love. I did have to date a couple of duds in the process, though. There was a guy who was a terrible listener. Another guy who seemed lazy and unmotivated, and didn’t seem to have goals or ambition. Not only did those duds helped me realize what I want and need out of a relationship, but they also showed me that no one is perfect, everyone has flaws, but despite that, there is something redeemable in us all. The bad listener was so funny and fun to go out with. He would tell me long stories about his past, his family, and his childhood that would never cease to make me laugh. But I grew tired of his inability to hear me when it was my turn to speak. This, in my opinion, was selfishness. I learned that listening is a trait I care most about. Though the lazy guy couldn’t tell me one future goal of his or even past accomplishment, he had a vast knowledge of music. He had some passion, though it didn’t translate to any action. Still, I learned a lot. Because I opened myself up to the dating world, I knew what I was looking for in another person, and I found him. A good listener. A kind person. Someone to make me laugh. A hard worker. No, he wouldn’t meet my unrealistic expectations set in my early teen years, which was basically a mixture of Prince Charming and Jake Gyllenhaal. He’s short. He’s funny. He’s incredibly messy! No he wasn’t perfect. But neither am I. Nor is our relationship joyous and happy all the time, as I imagined my grandparents to be, but it’s ours and because of that, it is perfect. Though the person you love may be different than you’d expected, your relationship should be exactly how you envision it.