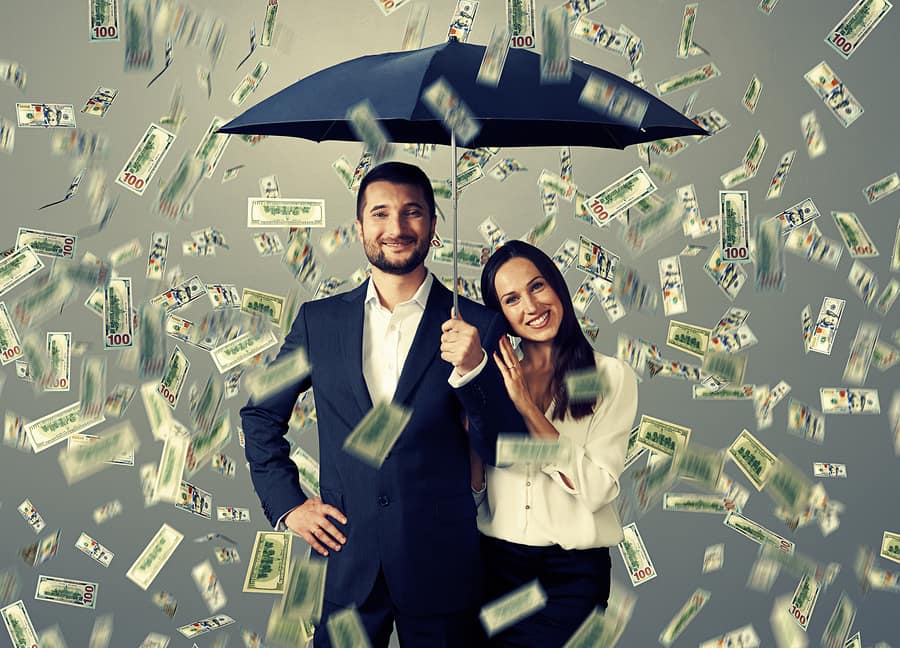 Love is grand. Love and money — eh, that’s a little less grand. Hell, most of the time it’s super complicated.

Talking about your finances with your partner — whether you’re quibbling over who paid for dinner last or deciding to make a big purchase — can be super stressful. And things get even more complicated when you start living together. When, how, and why you choose to combine your money is a tough decision, and every couple handles it differently.

While your friends and family will offer you plenty of dating advice, we tend to be less forthcoming with information about money management. And it’s not so simple as just copying our parents. We’re coming of age in a very different time: We’re the first group in the modern era to have higher levels of student loan debt, poverty and unemployment, and lower levels of wealth and personal income than our parents and grandparents had at the same stage of their lives. But it’s not all bad news. With more women working than ever before, 80% of millennials report being part of a dual-income couple. And we’ve found new ways to cobble together a living wage, with 38% of people under 35 relying on freelance work to contribute to their income.

So if you’re not using your parents model for managing money, and you probably shouldn’t demand to see your friends’ bank statements or 401(k) contributions, where do you go for real info? Well, we did the legwork for you, rounding up four young couples* — all somewhere between marriage and kids — who were willing to share the details of how they make their money work, individually, and as a unit. To help make the conversation as educational as possible, we asked Priya Malani, a financial planner and founder of Stash Wealth, to provide advice for each pair that’s also widely applicable.

Peter, 30, works as an editor for a major sports website, and he does some freelance sports writing for other high profile sites. Kelly, 29, is a full-time bath designer, who also does some kitchen and bedroom design on the side. She has aspirations of starting her own company one day. Kelly and Peter recently married and own a condo in Jersey City, NJ. Together, they make about $80,000 annually.

The couple moved in together after a year of dating, immediately opened a joint checking account, and got a shared credit card. From the beginning, they have contributed the majority of their paychecks to the joint account — putting about 60% of their individual incomes into the joint account and keeping 40% separate.

Peter is the nervous one about their finances, admitting money was tight when they first started dating. “I was probably over-anxious, he says. “But we didn’t spend outside our means in the early days, and we both made a conscious effort to not fight over finances.”

Living within their means worked well for them, and they’ve managed to put down financial roots, even in New York’s insane real estate market. In February 2014, Peter and Kelly bought a condo in Jersey City. It’s a long-term investment they hope to rent one day, to help offset the cost of a home large enough to accommodate a growing family.

Peter and Kelly don’t have too many immediate money concerns. “The only thing that would worry me is if one of us died, because we don’t have life insurance,” Kelly says. “Otherwise, we have health insurance, we have savings, and we’re okay.”

As their careers have evolved, so have their money management skills. Although a majority of their income still goes to the shared account, they’ve also opened individual credit cards. This allows Kelly to cover business expenses like design materials, without bogging down their joint credit limit. They’ve also been able to grow their side gigs: Peter’s freelance writing and Kelly’s interior design work. In the future, they’d like to be able to focus even more on these professional pursuits, but both are concerned about financial security.

“At the end of the day, we want to do what is best for ourselves — as that will lead us to what is best for our family,” Peter says. “Kelly has thought about trying to build her own business, but the stress of an uncertain financial future, particularly when we are preparing for a bigger space and kids, is enough to keep us doing what we are doing.”

Priya Malani was super impressed that Peter and Kelly are able to live within their means in such an expensive city. But, she urged them to open a Roth IRA as soon as possible.

“Saving for retirement when you’re young is much easier than when you’re older — each dollar counts a lot more,” she says.

Regarding Kelly’s concern about not having life insurance, Malani recommends looking into a term policy versus a whole life policy.

“As long as you keep up with your savings goals, you will do much better in the long run not to invest in a whole life policy,” Malani says.

For more information of the difference between term and whole life insurance, check out this story on Stash Wealth.