What I Learnt About Sex from Game of Thrones 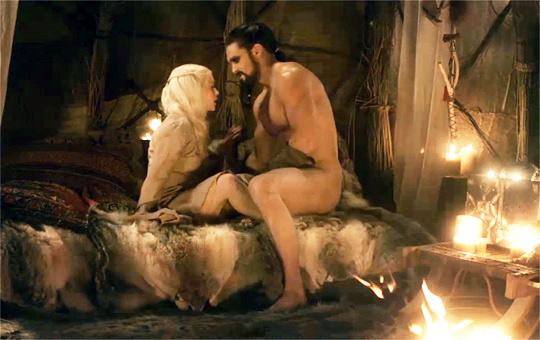 A week ago, I intended to write an article about tantric sex. Then I started watching season one of Game of Thrones. Now, and until I’ve caught up on seasons two, three and four, my boyfriend will be lucky if we have any sex at all, let alone sex of the tantric variety, which, let’s face it, takes ages.
Fortunately, my complete immersion in Game of Thrones has not precluded sexual exploration, because the show is bursting with nooky. If you find yourself watching one of the rare scenes with no sexual content, all you have to do is close your eyes, count to 60, and when you open them again, you will almost certainly be confronted with a nice pair of buttocks or breasts. If the plot does not permit any of the main actors to be naked at this particular time, the producers will have festooned the scene with a handful of naked extras (if Game of Thrones teaches us one thing, it is that serious political conversation and semi-clad prostitutes are by no means mutually exclusive).

For someone who likes to talk (a lot), I’m surprisingly coy when it comes to having serious conversations about sex within my relationships. Rather than be explicit about what I want, I tend to try to prod my partners in the right direction. Sometimes this works, sometimes not; often this approach results in me, and possibly them, settling for something that’s not quite right.

But after watching Game of Thrones at my boyfriend’s side, I thought its content could be a good springboard for some more direct chat – we were watching sex, so why not talk about it?

I began with a question about the apparently favored position of men doing it in made-up medieval Westeros: ‘Do you think they did doggy style more back then, or are the producers trying to make a point?’ (We were on episode three, and Daenerys had just succumbed to her first, and not very nice, experience of marital love.) There followed a brief debate on the extent to which the sexual content of Game of Thrones was well-researched. Our conclusion: not very. But, shortly after, my question was answered by the events unfolding on screen. Daenerys, keen to make her bow-legged husband happy, learns a few tricks from her slave, and, soon she is riding Drogo like the lady she is. On top.

And he likes it!

My next question brought the topic back round to us: ‘Do you like doing it doggy style?’

‘Sometimes,’ the boy slapped and squeezed my bum, ‘when I’m feeling like a Dothraki’.

‘But what’s your favourite position,’ I asked, confident that I already knew the answer.

I wanted to be sure we were on the same page, ‘You or me?’

And this was unexpected. Because everything I had observed during the two plus years of our relationship had told me otherwise. ‘But I thought you liked it best when I was on top…’

This was interesting. ‘Why?’

‘Because I like doing what I want for a bit.’

This answer shouldn’t have surprised me (not least, because his reason for liking being on top is exactly the same as mine), but it did, because we hardly ever do it missionary style. I wondered why he had never mentioned this to me before, but, of course, I already knew the answer: the fact was, I had never asked.

Now I know that this reluctance to talk about the finer details of sex cannot be restricted to me. I have talked about sex on stage and at work, with friends and complete strangers. I reckon I have pretty relaxed boundaries when it comes to discussing matters of the body, but I still find it hard to say: this is what I want from you, now what do you want from me? Until now, I’ve not thought much about how to change this. When I came across articles about being vocal in bed, I would think with a touch of regret, ‘That’s just not me,’ before moving on to the next one. But what these articles are often lacking are tips on how to initiate these oh-so-personal conversations. Game of Thrones has taught me that, by talking about the sex we see on TV, we can find a more natural way into talking about our own sex lives. 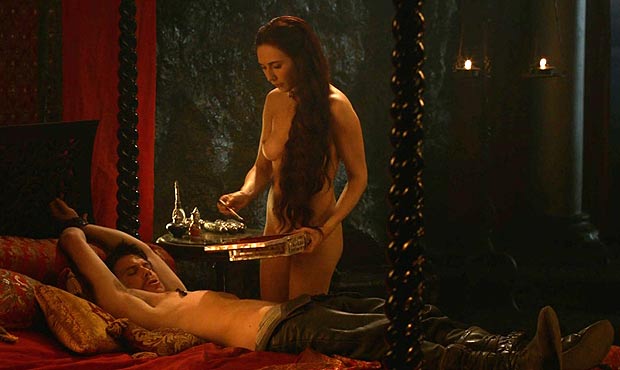 Last night the boy and I had sex. He took the lead, and I got a lot of pleasure from knowing that, this time, we were doing what he wanted – not just for a bit, but the whole way through. The pace of our sex was slightly different; for once, he stayed on top throughout, and, for both of us, it felt great.

Afterwards I asked him if he knew why it had been so good.

He thought for a second, ‘Because we haven’t done it for ages?’

I shook my head, ‘Because of Game of Thrones’.

He wasn’t convinced. But I knew…

What I Learnt About Sex from Game of Thrones