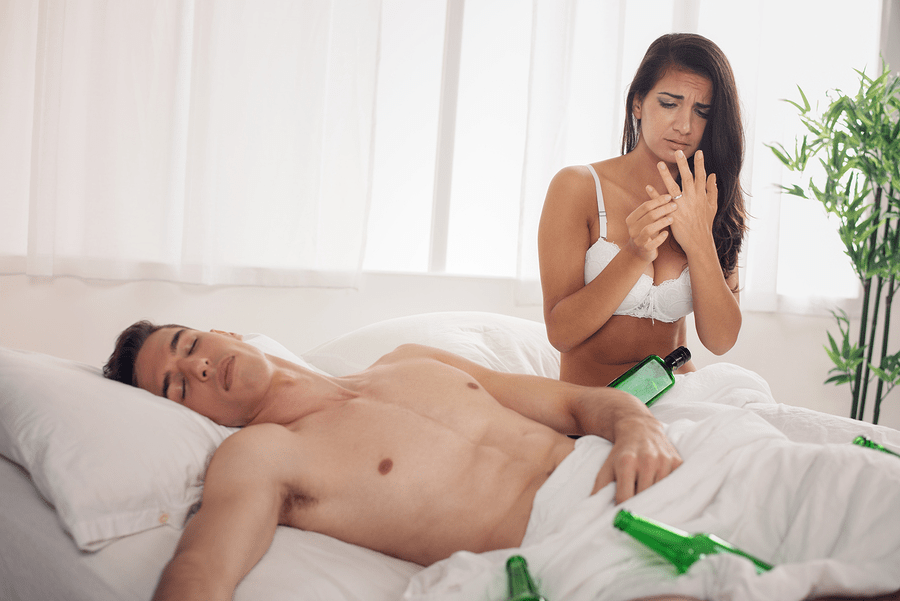 I’ve never been one to trust my gut, follow my instinct, or listen to that little voice inside, and that’s how I found myself, at 26, saying “I do” in front of an official justice of the peace, the greatest Elvis impersonator I’ve ever seen, and a man I’d known for 3 months.  I didn’t marry an Elvis impersonator, I married a man I’d known for only 3 months, total.  I thought I was being romantic and carefree, disregarding societal norms and traditions.  As someone who’d had a million one-night/few-night stands, but only a couple adult relationships, I thought that the hardest part of being married was finding someone to marry me.  So when the opportunity came up, I grabbed it and ran, forcing solutions to any possible roadblock between me being alone, and me having legal proof that I was loveable.

At the time we started dating/got engaged, he hadn’t paid his rent for several months, so I insisted that he move in with me, rent free.  It’s not like having him there would raise the rent I was already covering, so what did it matter?  It was a small price to pay for the validation of being an integral part of someone’s basic needs being met.  He was unemployed, and couldn’t afford the rings, so I bought them.  Did you catch that?  I BOUGHT MY OWN WEDDING RING.  I also used my accumulated airline miles to cover our flights to/from Vegas, where I also paid for the actual wedding.  If that’s not romance, what is?

You’re probably thinking “Damn, the sex must’ve been mind-blowing, to turn you out like that!”, and I regret to tell you that the sex was nothing more than garden-variety.  It was fine, just fine.  Not great, not OMG, just fine sex, nothing to write home about.  But he was willing to only have it with me, and I thought that his lack of quantity of partners meant more than quality.

Now I wasn’t a total pushover, I did require him to get a job before we took our vows, which he kept until we’d been married for 2 weeks.  After that, he was unemployed for quite a while, long enough for me to max out my credit cards taking care of us, including keeping our social life active, because I really enjoyed spending time with our friends.  His and mine, they all got along, and we had great nights hanging out at our apartment with everyone, big spontaneous parties that were fun, truly fun.  I guess I was drunk so much that I didn’t realize that those were really the only fun times.  My marriage was like the boat ride in Willy Wonka: it started off exciting, but quickly became a seemingly inescapable nightmare.

Here’s the thing: I could’ve avoided the whole mess you’re about to read, if only I’d listened to my gut.  See, the night before the wedding, we got into a huge argument.  We were in our hotel, about to go gambling, something set him off, and all of a sudden, we were screaming at each other.  Right there in the hotel suite, in front of our wedding clothes and everything.  I left the room, heading down to the snack bar to catch my breath, to get some air that wasn’t hanging heavy with anger.  I was sitting alone at a big, round table, when I heard a voice say “Don’t do this, don’t marry him.”  It was a voice inside my head, but so calm and clear that it sounded like someone else.  I indulged in considering that option, and felt a wave of peace wash over me that was quickly chased away by worries and but-thens.   “But then I’ll have to admit that everyone who questioned us was right.”,  “But then I’ll have to give back the wedding gifts, and we’ve already opened them, and I don’t have the money to pay people back.” One friend had given us a bedding set from our wedding registry, and we’d already had sex on it, making it unreturnable, I assumed.  I chose ease over instinct, and here’s what happened:

After he quit his job, he very, very leisurely searched for another one.  By “leisurely”, I mean that he mostly spent his days playing video games, and circling a few want-ads in the paper.  I had to find another part-time job to cover our expenses, because what I brought in as a touring comedian and part-time artist’s model wasn’t enough to cover the living expenses for two.  I could easily take care of myself, but now I was married, and responsible for the welfare of another adult as well.  After several months, he landed another temp job.  Then lost it.  Then got another, keeping it for nearly 4 months before declaring it BS, and walking off mid-shift.  He then decided that he had burned bridges with all the temp agencies in our town, and since I was insistent that he financially contribute, our only real option was to move to a remote town in Oregon, where he would apprentice for his uncle as a cabinet maker until he had the skills to support us wherever we wanted to live.

We sold our cars, and I gave up my dream apartment to go live in a truckstop-town full of secrets, a Mayberry on meth.  His uncle was “sober”, meaning that he smoked a lot of weed, but only occasionally had a beer or 6.  I’m not blaming the weed or booze for his laziness, but the cabinets never got made, and our situation did not improve. There were no jobs for him to get, after he failed the drug test for the one supermarket in town that had an opening. I guess I’d never known actual misery before, and being aware of that, and the impossibility of getting out of it all only made it worse.  After having my life threatened by a confused and angry tweeker who wandered into the porn store where I was a cashier for $20 a day, 3 days a week (our only source of income, btw) we moved to a bigger city. My husband quickly got an actual full-time job, but our relationship never flourished, or even recovered to the level of previous discontent.  I tried several times to end it, but, not wanting to repeat what he saw as the mistakes of his 5-times married father, he refused divorce.  Whenever I’d suggest it, he’d pull out the dramatics, one time actually throwing himself on the ground and repeatedly punching himself in the head.

I was afraid of his rage, his yelling, I remember being on the phone with him while I was on the road working, him loudly shouting accusations about why I hadn’t called him sooner after the show, and being scared to move, scared to sit up in my hotel room bed for fear he would somehow know, and it would somehow make him yell more, even though he was hundreds of miles away, not actually physically present.

After a few years of taking my vows seriously, and respecting the sanctity of our marriage, I resigned myself to the idea that it was just easier to stay married, but spend as much time as possible away from home pretending I wasn’t, than it was to get out of it.

Eventually we broke up, while I was out of town.  I cried all the time during my marriage, but not once over the death of it, never regretting the end at all.  To this day, the only thing I do regret was not listening to the voice I heard in Vegas, that of my small but clear instinct, which could’ve saved me 4 years and 4 million tears.