Taking Up Aerial Yoga and Its Benefits for Health and Wellness 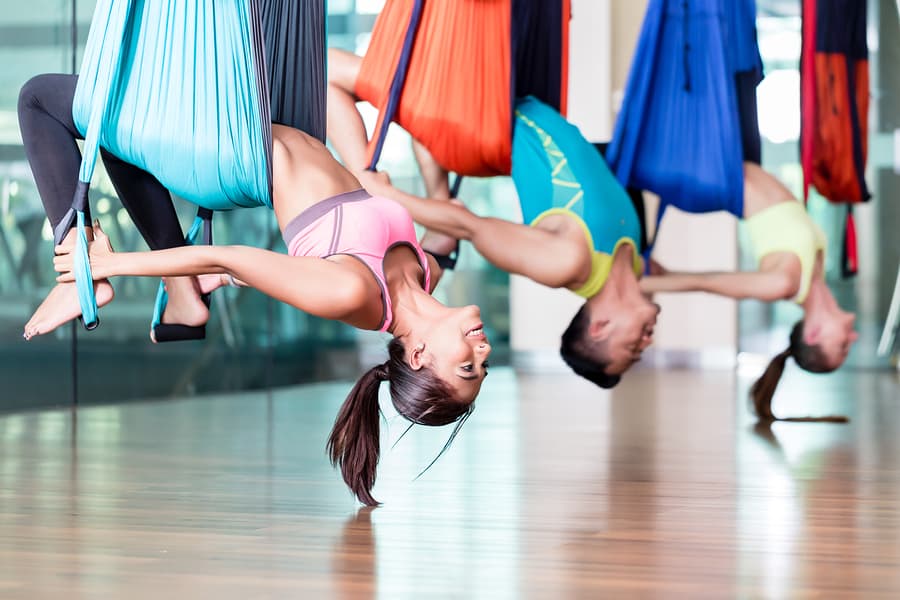 I am trying not to fall on my face. That’s not a metaphor for anything; I mean that I am quite literally trying not to fall on my face. I’m in a hammock, but rather than lying inside it, gently swaying in the breeze, maybe on a beach somewhere, I am crossways with it under my hips. My arms and legs are outstretched, and because “you go where your gaze is,” I am trying to look up and meet my own eyes in the mirrored wall in front of me, and not look down at the floor (causing aforementioned falling).  This is my second aerial yoga class, and if anything it’s even more difficult than the first, because I’m now painfully aware of my lack of upper body strength.

Aerial yoga is a combination of yoga, stretching, and acrobatics.

It’s a small class, so that there is enough space for swinging around, and so that the instructor can get around to everyone. Silk-like hammocks are hung from the ceiling, and yoga mats are placed beneath them. I’m still unsure if these are more for cushioning than for the floor-yoga parts of the class. There are warm up stretches done on the floor, and then stretches move into the hammocks. Once everyone is warmed up properly, the inversion part of the class starts. This is where you’ll see people hanging upside down, or wrapping one foot in the hammock to shimmy up it with the other.

Camaraderie is built very quickly in an aerial yoga class, I’ve found. I think this is partly because every inversion feels like a huge accomplishment, and partly because when you are hanging upside down, holding on to the hammock with your ankles, it’s helpful to be able to ask the person who has already flipped through their own hammock which leg you are supposed to cross over where. The mirrored wall in the yoga studio is equal parts help and hindrance when trying to work out left/right and front/back whilst upside down. 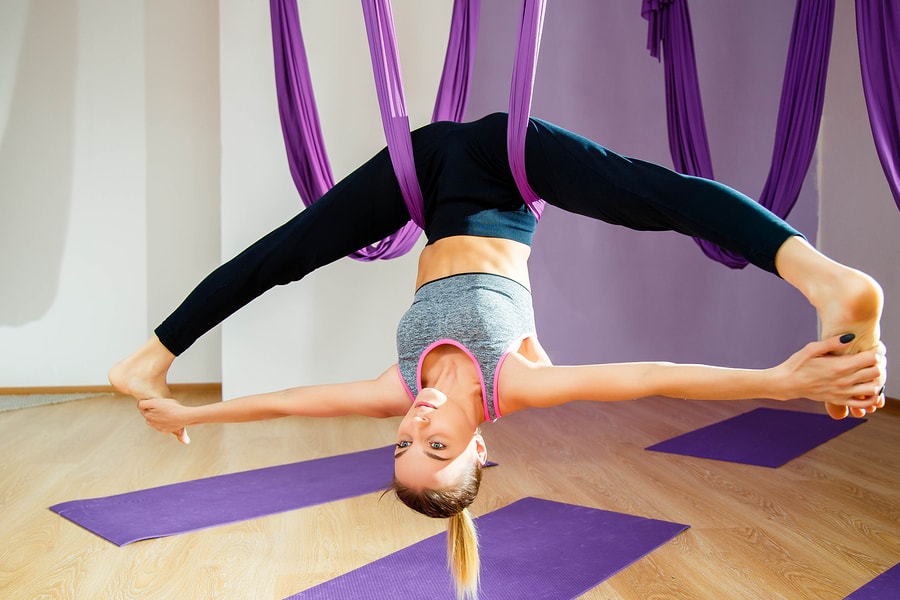 Yoga – on its own – is good for your wellbeing. It forces you to focus on your breathing, and to take slow, measured breaths. Movements are purposeful, and generally a yoga class is a calm environment, where you gradually build up your practice into more challenging poses. Yoga isn’t goal-focused (which can be a challenge in itself), and it’s a small, quiet break in our hectic day-to-days. Aerial yoga has all of those benefits, with the additions of having to trust yourself, and of the endorphin hit of having realised that you have indeed managed to scramble up the hammock to the ceiling, and tuck your foot behind your head at the same time. It’s a yoga class, but amped up in the best possible way: more effective, more focused, and with more of an adrenaline rush.

The Hammock both supports your weight and helps you balance, so yoga stretches which are difficult unaided (I’m looking at you, standing splits) are made easier. With the help of the hammock, you’re more flexible because there’s less stress on your joints and muscles. It’s almost a complete body workout, because your core is constantly engaged whilst you’re stretching out your limbs, but because you’re supported by the hammock, and because inversions and poses are aided by gravity, there’s less effort involved than if you were in a HIIT class.

On top of the physical benefits of aerial yoga, the adrenaline rush of finding yourself swinging around like a spider monkey does wonders for your mental wellbeing. It boosts your body’s endorphin, serotonin, and dopamine levels, making you feel happier and have more energy. There’s definitely something to be said for the feeling of achievement in finding yourself in what you thought was a difficult pose. Mostly, though, aerial yoga is a lot of fun. It feels almost childlike, to be suspended upside down, rummaging around inside a giant silk scarf, and using muscles you had forgotten you had. More than once, someone in the class has yelled “woo!” as they fly through a 180. It’s a playground for grown-ups, a workout that feels nothing like working out. It’s more difficult than I imagined it would be before I started, but it’s also much more rewarding.

We’re at the end of the class, and now – finally – comes the lying down, swaying gently part. I highly recommend savasana-ing in a dark green silky cocoon. It’s very relaxing. As the lights come on, and people emerge from their hammocks, there are smiles all around.

Taking Up Aerial Yoga and Its Benefits for Health and Wellness