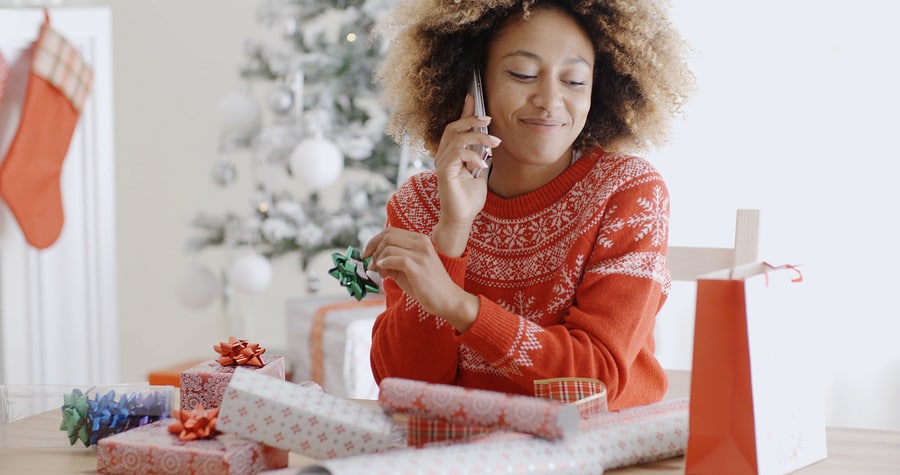 Last Christmas Eve, my wife Kim and I performed our annual holiday ritual. No stockings were hung, no champagne was toasted, no duet of “There’s No Place Like Home for the Holidays” was sung, no gifts were exchanged, just a couple of simple “I love yous” before drifting off to sleep — 270 miles apart.

For ten years running, we’ve spent the holidays apart. And it’s not just Christmas. We usually go our separate ways for Thanksgiving, too.

Kim heads north to join her family in suburban Boston; I go south to sit in my mom’s dank living room in her urban Philadelphia neighborhood. Why, you ask?

We adhere to a foolproof system for reducing the holiday-related torture known as in-laws.

No, not really. Yes, that’s the standing laugh line we use when people look at us like we’ve just told them that we’re swingers with a “Hey, what’re you doing this weekend?” look, but chronic familial avoidance was actually never a major factor for us.

It seemed logical, reasonable, and economical in 1999, so we did it. And kept on doing it year after year. At this point, the reason we split up on the two biggest holidays of the year is that it’s become a tradition.

Some people have their big dinner Christmas Eve, others on Christmas Day. And some people’s time-honored Christmas ritual includes holding hands in the cold on 8th Avenue in Manhattan before tearily boarding Bolt buses headed in opposite directions on I-95.

That’s a slight exaggeration. Kim gets up much much earlier than I do, so our parting is usually a kiss on the slumbering cheek and an unrequited, “Tell your Mom I said ‘Merry Christmas.'”

To us, it seems like no big deal, but last year when I started a new job, some of the women in my office found this whole thing truly remarkable. One thought it a perfect synthesis of modern marriage; another an interesting precedent to look into; another couldn’t believe either mother-in-law would allow it; while a fourth simply looked at me with sad eyes and said in a muted tone, as if our puppy had just perished, “Wow, that’s too bad.”

The thing is, though, it’s not. From our perspective, the idea of the importance of holidays trumps the actual events of the day itself.

We don’t have any kids (yet), so it’s not like we’re missing out on the joys of watching our footie-pajama-clad-brood roll around in shiny wrapping paper. And we have spent a few Thanksgivings together at home in New York City, but only when there were special extenuating circumstances, like West Coast visitors or being tasked to march with Barney in the Macy’s Thanksgiving Day Parade.

As for Christmas, well, it works out for the best. Kim’s family celebrates traditionally with a big tree, a big meal, and a big discussion on how early they should get up to work out on Dec. 26.

Mom and I, we spend a lot of time on her couch. She lives alone in a ramshackle rowhouse in a decaying neighborhood, so decorating isn’t all that high on her holiday priority list. We watch TV; we talk about the old days; we call my brothers; and then I get drunk with my cousins. This isn’t to say that we don’t have a fine time together; it just lacks 95 percent of the typical holiday hullabaloo.

Except for the year my dad made cold pumpkin soup. (Three decades later, I still shudder.)

My Uncle John always cooks up a nice prime rib on Christmas Day, and the night before, Mom and I go out to eat. One year, the only place we could find open was a Shula’s Steakhouse. Their menu comes on a football, an actual leather football. God bless us, everyone!

Kim’s experience is a little more Bedford Falls to my Pottersville, which suits us both just fine. Her upside is the Christmas-y feel of hot cocoa in her pajamas; mine is that Mom no longer has the desire to attend Christmas Mass.

The most important part is that it works for Kim and me. If there was ever any in-law badgering about the standing arrangement, it went by the wayside as soon as a lack of grandchildren rendered us more or less irrelevant.

At the dawn of a new decade, however, our perfect holiday system may have run its course. When we met back up at home, Kim announced that she didn’t want to split up for both Thanksgiving and Christmas anymore. And as much as I enjoyed the Thanksgiving meal and forgotten family trivia served up at the Palm in Philly (FYI: It’s housed in the same building where my mom’s high school prom took place), it may be time for Kim and me to start our own damn traditions.

Nothing wrong with celebrating the second Monday in November, or the holy day of Dec. 28.

After all, it’s not the calendar, it’s the company.