There can be many frustrating questions left unanswered when a relationship ends, but what if you could have them all addressed once and for all?

Seven brave former couples took part in Cut.com’s new Truth or Drink video and asked each other 30 questions ranging from funny to poignant.

The clip sees the exes play a game where they either reveal how they tried to get over each other, what their family thought of them, or if they still fantasise about each other – or take a shot instead. 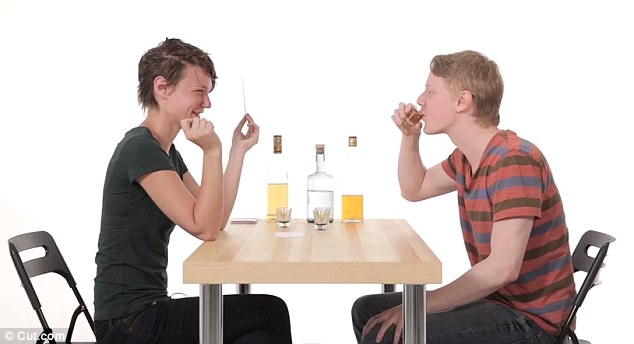 Cory and Karen, Michael and Mai, Nikki and Evan, Skylar and Kathleen, Ty and Ian, Kelsey and Taylor and Timothy and Christopher sat down opposite each other for the quiz.

They explain what the relationship was – from those who were a summer fling to those who dated for a year and a half – and then how long ago it happened.

Most ex-couples are now friends and are seen laughing at each other’s bad behaviour and take the game with a pinch of salt, even doing body shots off each other or even kissing on the mouth.

When it comes to asking each other why and how they broke up, some reveal it was tough while for others it was light and mutual.

Cory says he and Karen were ‘both worried we would catch feelings’, so she sent him a termination letter.

Karen reads it aloud off her phone: ‘Dear Cory, it is with sincere regret that I must inform you that you have been officially demoted to “guy I used to hook up with”‘. 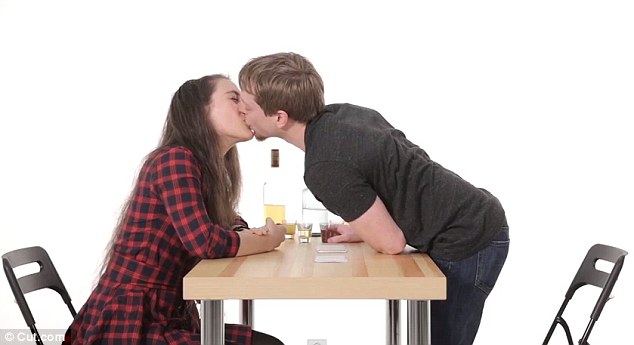 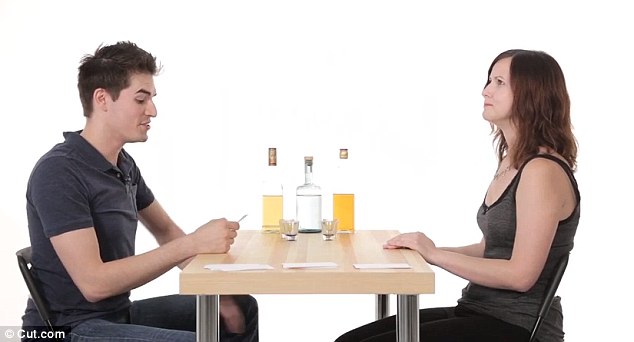 When asked ‘How long did it take you to get over us and what did you do to get over it?’ one guy downs a shot and says he is still getting over it

Cory then reads his reply: ‘Dearest Karen Nicole, What can I do to re earn a position doing many different positions?’

The pair share a lingering smooch when dared to kiss, even prompting applause from the crew.

I can’t go there. I’m getting over it right now by doing this

He takes a long pause before looking towards the crew and announcing loudly: ‘Yes.’

Nikki is shown looking clearly surprised and laughs out loud before the pair high-five.

A man who asked his ex the same question replied with ‘you know you could call me when that happens’.

For many others, the question is too embarrassing and they take a shot instead.

When asked ‘How long did it take you to get over us and what did you do to get over it?’ one former boyfriend attempts to dodge the question.

He said: ‘I can’t go there. I’m getting over it right now by doing this’, before taking a shot.

Nikki and Evan are in agreement that the thing they miss most about them as a couple is the sex, and that they would become lovers again if they were the last people on Earth. 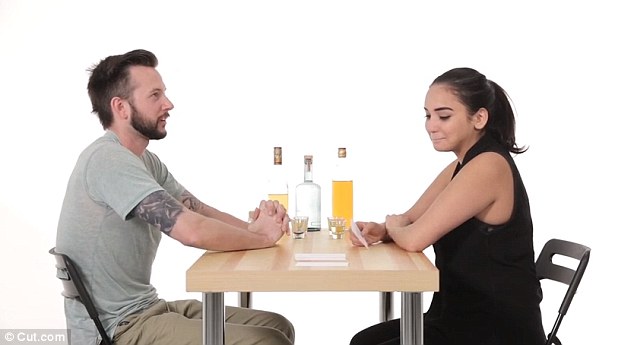 Some, who clearly make a bad impression on their exes’ families, were left hanging when they asked their ex what their friends and parents think of them.

Timothy and Christopher, who dated for a year and a half, asked each other where they see their relationship going in the next decade.

When one said to the other that he sees them growing apart, he is met with the reply: ‘That’s a sad thing to say.’

With moments of lump-in-the-throat poignancy and evident sexual tension, it’s a gripping watch for anyone who’s been left guessing.