How I Learned True, Unconditional Love from Adopting Our Dog 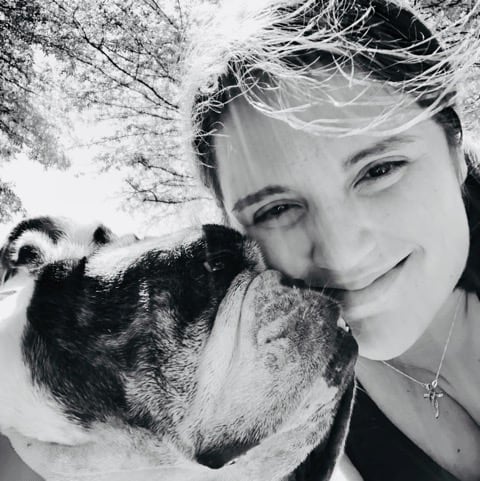 We owned our dog Moe for five years.

Over Memorial Day weekend in 2014, my boyfriend and I adopted our English bulldog Moe.

Never before have I experienced the pure, unconditional love I had with Moe. I used to read stories about how the love between a dog and its owner is unlike any other. Having had the privilege of caring for Moe for five years, I’ve truly been able to see that.

Disclaimer: Shortly after I wrote this piece, Moe passed away unexpectedly. I rewrote some of this piece to reflect that.

A Bulldog with Lots of Special Needs 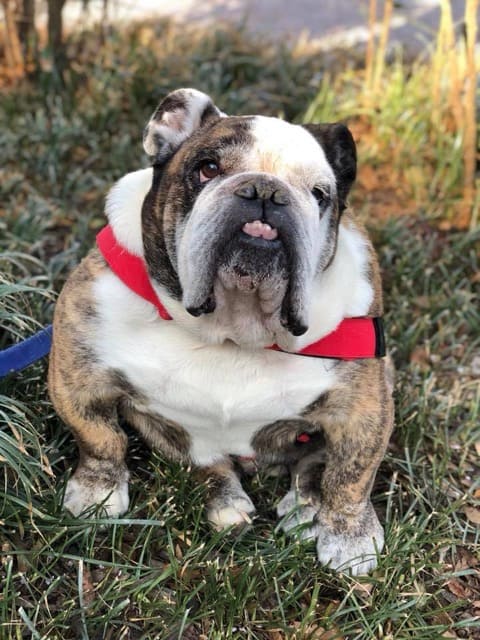 I had grown up with labs but my boyfriend was dead set on a bulldog—a wrinkly, lovable, stubborn as hell English bulldog. I nervously agreed, having no idea what I was getting myself into.

Once we brought Moe home, he threw up on the carpet pretty much as soon as he stepped through our threshold. We laughed it off and he soon adjusted well. A few days later, when the vet came by (we don’t have a car so we found a home vet) we realized just how much work Moe would need.

She took an ear culture and it was soon determined Moe had MRSA, or a antibiotic-resistant staph infection in his ears. I’d have to wear latex gloves to administer medication. His paws were raw and infected and he’d need daily ear cleanings, paw cleanings and wiping out of his face wrinkles. All I could think of was the word YIKES. However, as Moe looked up at me with his red and watery eyes, I could sense that he was comfortable here—he knew he had found his forever home. I sighed and thought about how we had no idea where he was from birth to three, and lived with a single mom and her school-age child from three until he was five-and-a-half, when we adopted him from a local rescue, Lost Dog and Cat Rescue Foundation. I remember thinking, What was your life like as a puppy, buddy? I hope you were okay. I already could tell I was falling in love with him. 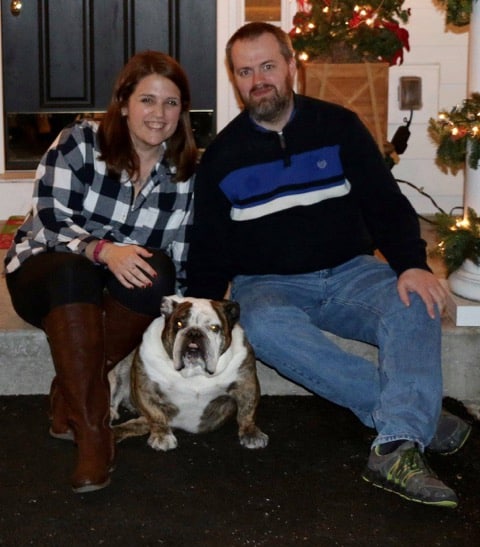 Before Moe passed at 10, he took thyroid medicine, heartburn medicine, two different types of pain pills and Zyrtec for allergies every morning. He ate prescription food and sometimes had trouble walking. He peed all over our floor and refused to use the potty pads we placed all over our apartment like a second carpet.

You know what though? I wouldn’t have it any other way. I know there are articles out there that say people who say their pets are like children are crazy. I used to think that too—until I started spending my days wiping Moe’s butt because he has an amputated tail and muscles aren’t 100 percent back there. He often woke up in the middle of the night to scratch his itchy ears against the wall or panted heavily when he accidentally shoved his nose into his favorite blanket. Laying with him to get him to go back to sleep reminded me so much of having a child. There was nothing better than placing my hand over his paw as he drifted back into whatever dogs dream about. It not only comforted him, but in a weird way it comforted me as well.

How Moe Taught Me Patience 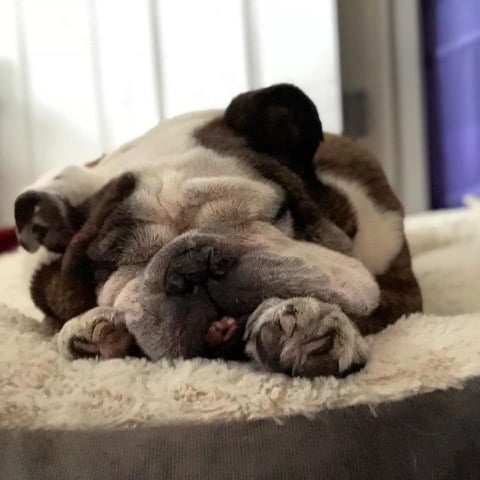 Moe was very much like a typical bulldog—slow and stubborn. The morning I originally wrote this piece, he refused to come inside. He was loving the chilly 50 degree temperatures combined with warm, early spring sun. Back when he would go for longer walks, he would often stop and sniff every tree and bush. I mean every. Single. One.

This used to frustrate me and try my patience but I realized just how little dogs are here on Earth. They take time to stop and “smell the flowers.” I learned to love when Moe does this because it teaches me to take a deep breath and just enjoy life around me. The work and other duties can wait.

I am so grateful I did stop and enjoy life with Moe. Bulldogs often pass quickly and unexpectedly, and Moe did just that. He woke up last Wednesday morning and was gone two hours later.

He Loves Me, No Matter How Messy My Hair Is 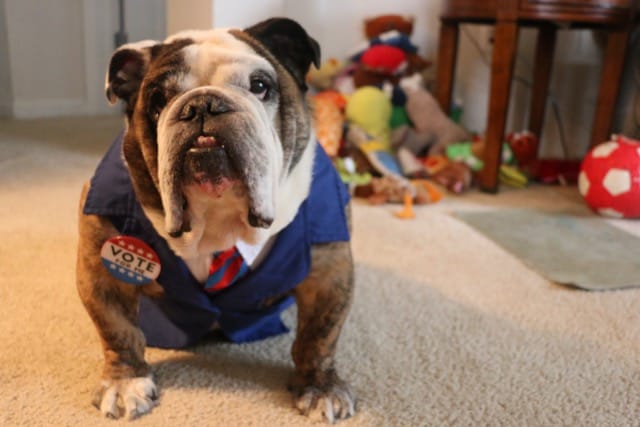 One of the best parts of dogs is that they are completely nonjudgmental. They love you unconditionally. Moe held to this standard (and then some!). He didn’t care what I weighed and it didn’t matter to him if I was wearing a ripped, three sizes too big t-shirt and my hair was a mess. He stood guard in the bathroom while I showered, not caring if I sing out of tune as I washed my hair.

Once, when I was really sick and fainted in my apartment, I regained consciousness to Moe sitting and staring down at me. After that, he spent the next few months acting out at around the same time I fainted and had to call an ambulance. I realized he was so worried about me that he was deeply affected by that episode for weeks. I had never thought about how deep our relationship was until then.

Moe Has Taught Me to Treasure Every Moment 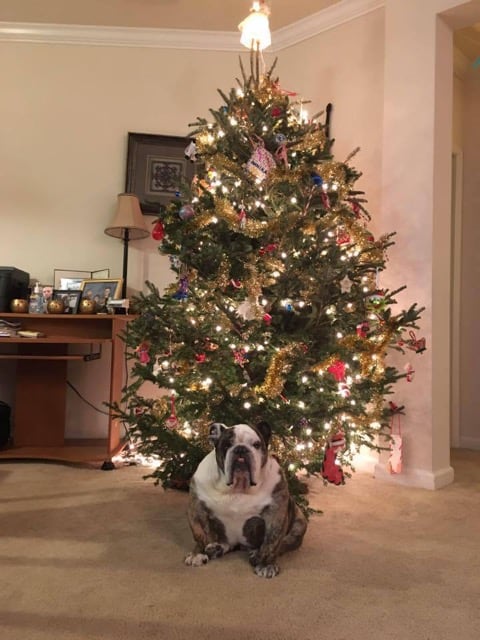 As I mentioned earlier, dogs don’t live that long and bulldogs live even less than other breeds. Knowing that taught me to not take every moment I had with him for granted. I laid with him at night on the floor, petting him and taking in his musty doggy scent, thinking about what an odd-looking, stubborn and stinky creature he is. I would think about that and smile, because he was mine and I was so glad.

Since Moe passed, we have received five different bouquets of flowers and one gigantic gift basket from my boyfriend’s workplace. The convenience store next door has asked for a photo of him to frame since he often stopped in for Slim Jims. The comments on social media have reached over 1,000. His old owner even contacted us to let us know that he was so loved and sent us pictures of him from his younger years. We are forever thankful for her selfless decision to put him up for adoption in order for Moe to get the care he needed.

I have learned that the love Moe gave was released into the world and is now coming back to us tenfold. 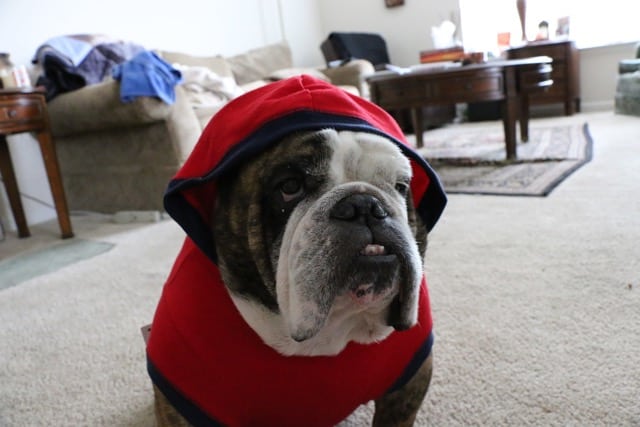 Not only did I not take Moe for granted, I now don’t take moments with my boyfriend, friends, family and loved ones for granted either. Ever since we adopted Moe, my gratitude and genuine love for those in my orbit has grown immensely. For that, I’ll be forever thankful for our boy. We will miss him terribly but will remember all the love.

Continue that gratitude and celebrate your next anniversary with one of these seven ideas.

How I Learned True, Unconditional Love from Adopting Our Dog