Can’t You Just Apologize? The Power of Owning Up 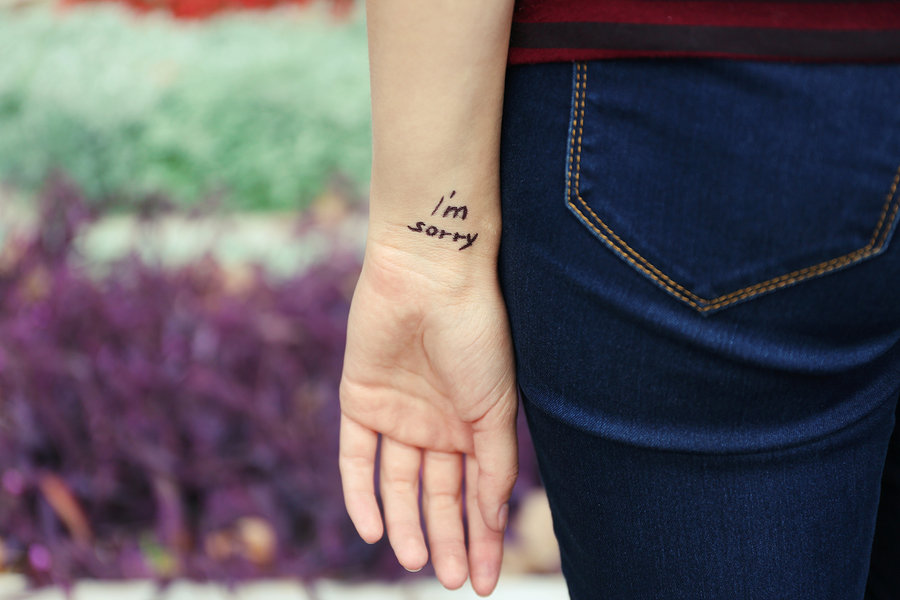 “Sincere apologies are for those that make them, not for those to whom they are made.” ~ Greg LeMond

When I was growing up, every time I took my sister’s toy or called my brother names, my mother would grab me by the wrist and demanded that I offer an apology. What’s more, if the apology didn’t sound meaningful enough to her, I had to repeat it until my tone was genuine. An apology was the basic reaction to any mistake.

Now that I’m older, I see apologizing as more than just a household rule. My younger self didn’t understand the complexities of human pride and self-righteousness, but my older self does.

Now, I see family members refusing to talk to each other for years after an argument just because neither side wants to be the first to let go of their pride and “break down and apologize.” But who decided apologizing was a sign of weakness?

I think we’ve reached a day and age where showing emotional vulnerability can be viewed as a positive rather than a negative quality.

People are becoming more aware of ideas like empathy and sensitivity, and everywhere we are being encouraged to talk about our feelings, to seek help, and to connect with others. Gone are the days of keeping everything bottled up inside to suffer alone.

As we move forward in this time of self-knowledge and self-discovery, it’s vital to acquire the ability to recognize our own mistakes. Nobody is perfect, and we all will do something to hurt another person at some point in our lives. The difference, however, lies acknowledging that we have done something wrong.

This was hard for me to grasp, because I was taught that an apology should be an automatic response.

It took me a long time to realize what it meant to say “I’m sorry” from the heart. Apologizing just for the sake of apologizing is meaningless. We cannot genuinely apologize if we can’t admit to ourselves that we made a mistake.

This is where humility comes in. Can we look at ourselves in the mirror and say that it was at least partly our fault? Can we take that responsibility?

Placing the blame on someone else is easy. Making excuses and skirting the subject is easy. Assuming the full weight of blame on our own shoulders, however, is very hard.

I learned this the hard way with a childhood friend of mine. As we grew older, we started becoming more competitive in the things we did together, and eventually the playful competition went a little too far.

It became a game of silently trying to prove who was better, and we ended up hurting each other over our pride.

We refused to apologize or even address what was going on because neither wanted to be the one to “give in.”

The tension kept growing, breaking apart our friendship. I wish I could go back now, because if I had taken responsibility for the mistakes I made, we probably could have resolved it easily and saved our friendship.

Instead, I let my pride take priority over my relationships with the people around me.

Learning to apologize is the first and most important step in the healing process. Not only does it show the recipient that you acknowledge their right to feel hurt, but it opens the way to forgiveness.

It seems so silly, really. I mean, it’s only two tiny words. How can something so small be so powerful?

Well, there have been various scientific studies on the power of apologizing, which have demonstrated that when the victim receives an apology from his offender, he develops empathy toward that person, which later develops more quickly into forgiveness.

This is due to the fact that when we receive an apology, we feel that our offender recognizes our pain and is willing to help us heal.

Timing is an important aspect to keep in mind, as well, because sometimes the other person might not be ready to accept your apology. Sometimes we need to allow time to heal the wounds a little bit before we come forward to say “I’m sorry.”

An apology cannot undo what has been done, but it can help ease the pain and tension of the aftermath. It gives hope for rebuilding, and puts value on the relationship rather than the individual’s pride.

Sometimes people don’t even realize the hurt they are creating around them by failing to take responsibility for their actions. Maybe it’s you, maybe it’s someone you know, but everyone knows someone who has suffered from this at some time.

Now is the time to make a change.

Often times those two simple words are worth more than a lifetime of excuses and explanations.

Can’t You Just Apologize? The Power of Owning Up