Beyond the Gender Norm: Taking a Married Name 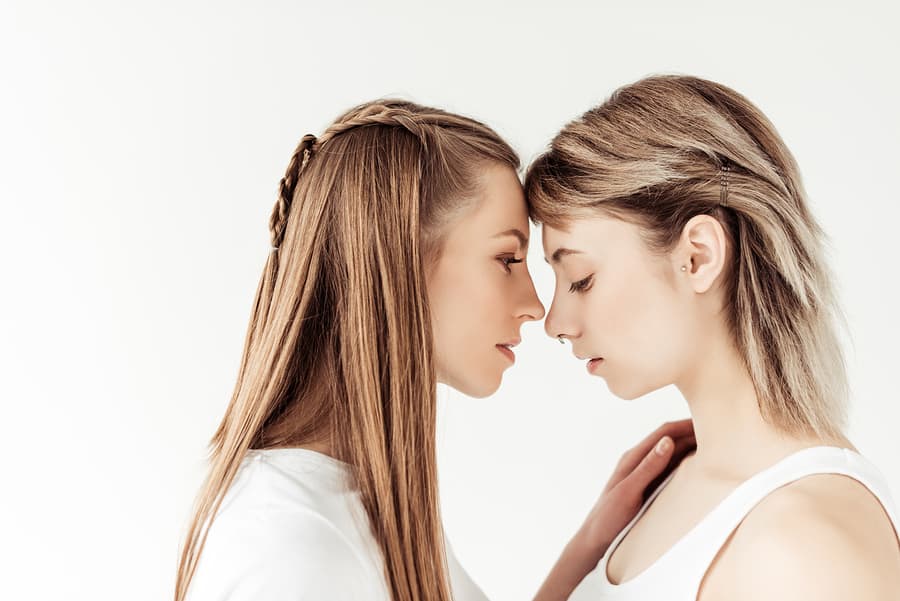 I realized that there were far more stories to tell about this, especially beyond the heterosexual continuum.

When a person gets married, they are presented with a choice: do they take their spouse’s name or not? How does gender and societal expectations play into it?

Several months ago, I reported on my own experiences when I got married and the decisions of two women who made their own choices about taking a married name. I elected to keep my name in part to honor my own family, a disinclination for the process and a few other reasons. For the two I interviewed, their decisions had little to do with tradition.

When the article came out, I was astonished to find out how many people responded. People I hadn’t heard of were telling me about their experiences. It was more than an either or: take the name or not. There are many more additional possibilities  including combining names, and even creating new names.

I talked to three more couples about their experiences when they married. Names have been changed for anonymity.

Her husband decided to hyphenate his name too.

On a bright Sunday morning in October, I met with a lovely couple in a local coffee shop: “Samantha and Lawrence.” Lawrence had made the decision to hyphenate his name with Samatha’s.

“I had been given my grandfather’s name as my middle name because my mom very much valued her family name. I didn’t,” he said.

He went on to say that he comes from a very large family.

“While I love my mom and dad, I didn’t have an attachment to that idea.,” Lawrence continued. “So, when I got married, I just figured I would change my name. I think that hyphenating my name has made me closer to [her] family, which I really enjoy.”

Lawrence told me that he’s heard of those who take pride in their name.

“I know a lot of guys feel that they have to spread their name, but I have no intention of having children, I think helps part of it,” he said.

When I asked how his family handled his decision, he told me his parents are in denial.

“My mom still writes checks to me under my [old name],” he said.

When I questioned  Samantha about how her family reacted to his decision, she said they loved it.

“My family really likes that he’s into the name,” she said.” I think my dad really likes it a lot. Not in ‘you have to pass it down’ but as a gesture, you’ve become part of this. It feels more inclusive.”

Lawrence noted that the federal government makes it easy to change your name. “It takes about 15 minutes,” he said.

However, the state they live in is a different process. “I have been trying for three and half years to change my name on all documents… the State of Illinois refuses to do it unless I provide a marriage license, proof that I have changed my name with the federal government, three pieces of mail and some other stuff.”

His former colleagues at the company he worked when they got married were fine with it. His friends don’t call each other by their last name.

“With Internet culture, it’s much easier to have a different last name then you actually have.” his wife added. “We have a shared name on Facebook, so we have the sense that we are totally together without having to jump through any of the bureaucratic hoops.”

I asked Samantha about her decision not to change her name and she told me, “I never thought I would change my name.

“I never had any intention of doing so from an early age,” she said.” I decided I would never get married. If I got married by some strange coincidence, I would stick with what I liked. This is partially based a lot on feminist ideal.”

She explained that her mother didn’t change her name and was a model for her.

“It seemed difficulty to functionally change your name in society,” she continued.The bureaucracy of it. As [my husband] was going through it, I was like this was as terrible as I thought.”

There are  also professional considerations to take into account.

Lawrence and Samantha did note that they considered creating a new surname entirely.

“I believe we were going with Bloodaxe for a long period of time. Because it sounds real badass…I pulled back,” she said. “We both decided this was not, perhaps, how we wanted to be known at age 75.”

At the end of our interview, Lawrence indicated  it’s something he thinks more men should try.

“It’s one of the few pieces of toxic masculinity that I kinda find surprising in people.,” he said. “Some guys are just really resistant against this when they would be otherwise great feminists. It seems like one of those things: ‘Why would I even do this?’

He explained that, for him, it wasn’t a hesitation. “I wanted to be part of this family and I had in a way make myself closer to it. So I did it.”

Deciding which last name to take after the wedding might be easier for two men. 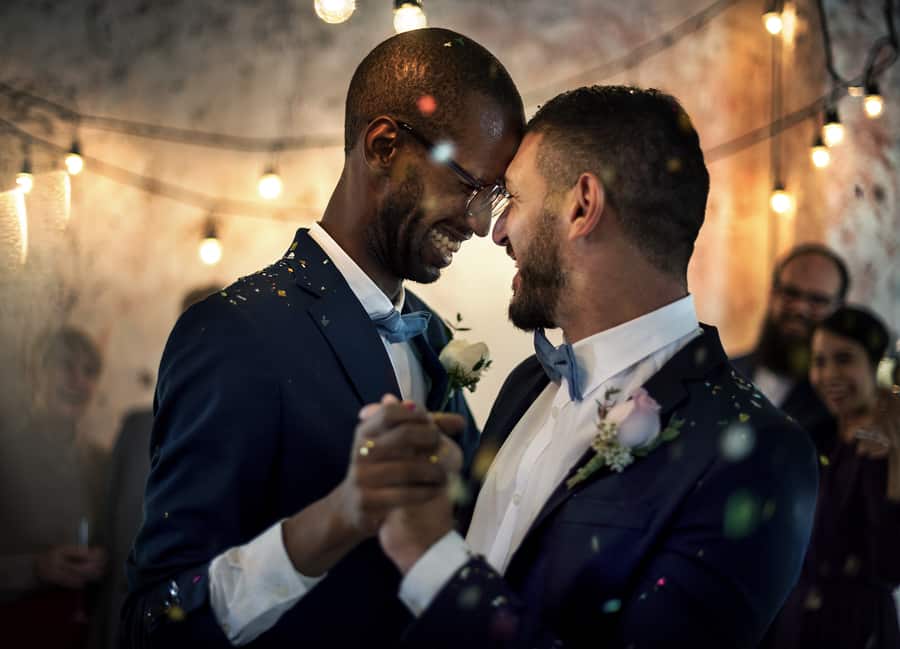 A young gay couple in a bustling sandwich shop explained how things are easier for them.  Nearby us, a guitarist crooned classic folk and rock and roll songs.

I asked “Walter and Mark” about their decision not to change their names when they got married two years ago.

“We benefit in this regard from the same thing that our wedding benefited from, which is nobody has any preset expectations about a gay marriage,” Walter explained. ”In fact, it’s because of that. So far, we have not changed our names because people do not expect men to. We just figured it would be much more of a hassle than it would be for a woman, who people expect to have a maiden name or a hyphenated name.”

He said that for a man to change his name he thought people would find it suspicious or confusing. But there were other considerations. Mark is not currently a US citizen and explained, “That really complicated things. Changing your name whilst applying for your permanent residency.”

“My parents hyphenate our names when they send us packages.,” Mark said when explaining how others respond respond to their decision. “And our dogs have hyphenated names but we don’t.”

Walter noted that his father had a different reaction. He was offended Walter’s sister-in-law didn’t change her name when she and Walter’s brother married.

“I was talking to him about us doing it. He said, ‘Yeah, it would be silly for two men to change their name,’” Walter said.“Which is kinda sexist. I then I said, if we did change it, [we would hyphenate it one way]. He immediately said, ‘That sounds really cool. You should change it.’ Because it’s an aristocratic sounding name.”

At the end of the interview, Mark noted that no one has ever asked him about their married name before.

It felt very heteronormative to ask Molly to change her last name.

My final interview was with a young lesbian couple who just had their first child.

“Molly and Megan” decided what made them hyphenate their names when they married.

“I didn’t want to lose my last name.,” Megan said. “I had a lot of identity wrapped up in it. Ironically, I am more connected to my mom’s side of the family, but the last name is very Irish and I connect with my Irish roots.”

She explained that it felt heteronormative to ask Molly to change her name.

“We also knew we wanted to have kids and we wanted to share a last name with them, especially since I wouldn’t be connected genetically to them,” Megan continued. “Molly’s last name is already hyphenated and I certainly wasn’t going to have a triple hyphenated last name! She had a connection with [one of] the last name[s] so we hyphenated [with that].”

Neither of their families had a strong reaction and friends don’t care much either.

“The public in general is very confused by hyphenated last names and online forms often don’t let you add special characters,” Megan said. “So my name is now constantly being butchered, which is annoying.”

From these interviews, similar themes arose from my original interview. The issue of bureaucracy was a major one.  Changing names has implications for one’s career or even citizenship. There’s the bureaucratic hurdles of simply getting a named changed, especially in Illinois.

I was also struck by the issue of aesthetic of the names themselves. There was a sense with almost everyone about how certain names sounded better together, whether it was a first and last name, or the order of hyphenating names. There was simply a more harmonious way to combine names.

I briefly considered hyphenating my name with my husband’s but recalled how complicated it was to spell my last name as a dyslexic school child. As for creating a new surname, my husband and I considered combining our names in interesting ways: Shiz, Shoenpriz, Prizenberger…but none seemed to satisfy either of us.

One interesting theme that came up was the issue of children. Both Megan and Molly and Mark and Walter mentioned that they wanted to change their name if they had kids while Samantha and Lawrence specifically mentioned they were not.

That became the problem with my own long last name as a child. My mom told me that was part of her rationale for changing her name. My husband and I haven’t really discussed how we’ll handle this possibility but it’s an important consideration. Especially in light of my own experiences as a dyslexic child.

I was interested in how society approached the issue of gender when it came to the names. As Mark and Walter noted, no one had any expectation of them to change their names; no one had even asked. Lawrence noted how few men even consider changing or adding their wife’s name to their own.

These contrast with the viewpoints of all the women in my little study. We all had thought about the possibility. As women, we had grown up in a society that expected it. We all just had strong decisions or attachments to our names.

Of course, I should talk to my husband about the possibility of changing our names to the Bookaxes.

Beyond the Gender Norm: Taking a Married Name