It was like making contact with an extraterrestrial, that moment when a wild octopus reached one of its eight arms of supreme intelligence out to hold my hand for a moment. If you thought drugs were the link to ecstasy, I would bet all my life’s adventures on this moment being a truly peak ecstatic experience. 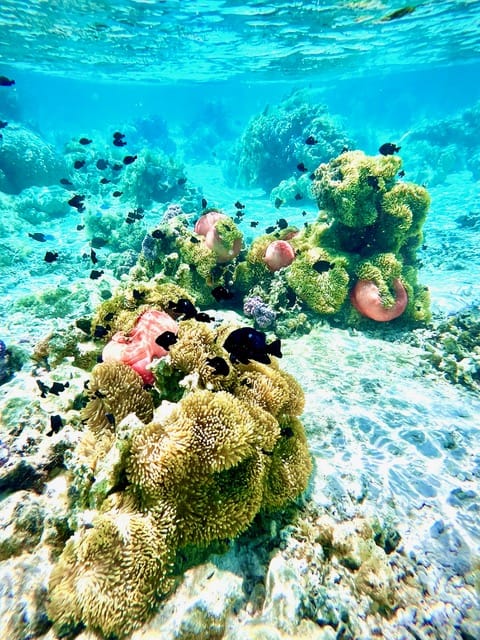 My husband and I were snorkeling in a highly sought-after destination, Le Jardin de Corail, The Coral Garden, off the coast of Taha’a, an island in French Polynesia. Sandwiched in between two motus, two small bits of land, in the pacific ocean, is a lush underwater oasis rich with thriving hard corals, anemones, colorful clams and bright exotic fish that seem so used to being gawked at by lazy swimmers floating along on the current’s dime that they have no problem swimming up to you and along with you.
I’d heard a fellow guest of the Le Taha’a Resort mention that he saw an octopus in the coral garden, so I said to my husband, “Oh I hope we get to see the octopus!” 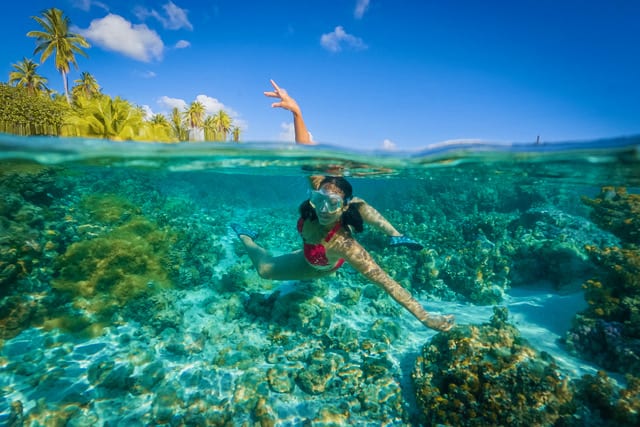 We were nearing the end of our second self-guided garden tour when I spotted it! A medium-sized reddish octopus clinging to some coral. I got my husband’s attention and we casually drifted over to observe this otherworldly creature. A minute or so later I spotted another octopus, completely camouflaged nearby. This second octopus seemed a bit more shy than the first, and in my best octopian translation seemed to be communicating to the first octopus, “Come on, let’s get outta here.” I’ve read that octopuses (which is the true plural of octopus) communicate through the cups along their tentacles. It’s how they gather and send information. So in a bizarre acrobatic-dance-like-slow-motion movement, the first octopus reached a tentacle out as far as it could possibly reach in an effort to touch its friend as if to send a message, “Don’t leave, it’s safe to stay.” But before it could make contact, the shy octopus slinked out of sight.
I will refer to the first octopus as she/her from now on.
This friend leaving seemed to cause her some indecision, like a child being torn between wanting to stay and play with a new friend, and leaving the playground with her old friend. So she traveled a little here, a little there, but never fully abandoning our presence. During this whole time I concentrated on putting myself into a meditative state and opening my heart up, sending metta (universal loving kindness) to this divine being. I think the octopus could feel my revealed heart and so she chose to stay put. As I rocked gently side to side in the water’s rhythmic current, I continued to embrace this creature with my entire self in an effort to fuse our energies into one interconnected experience of life. Slowly I reached my hand out toward the octopus and left it there letting her know that I am open for contact and energetically sent the message, “I see you, we are one.” I was willing to stay there as long as it took to receive an answer, even if that answer was a rejection and a slipping away. Perhaps this special creature understood that I was simply grateful to share space with her and revel in her dignified essence, and so she allowed us to be and exist with her.
After about 8 minutes that felt like they held eternity and yet time had ceased to exist all together, this innocent, intelligent, complex and alien like entity, reached back for me, clasped my fingers with it’s delicate tentacle feelers, and then…. released me.
It was like making contact with God. This infinitely different being from myself in all physical ways felt that I understood our true oneness, and therefore reached out to touch me, bless me. Is this not the essence of spirituality? Connecting to divine source through oneness unites us with the infinite and blesses us with universal wisdom. 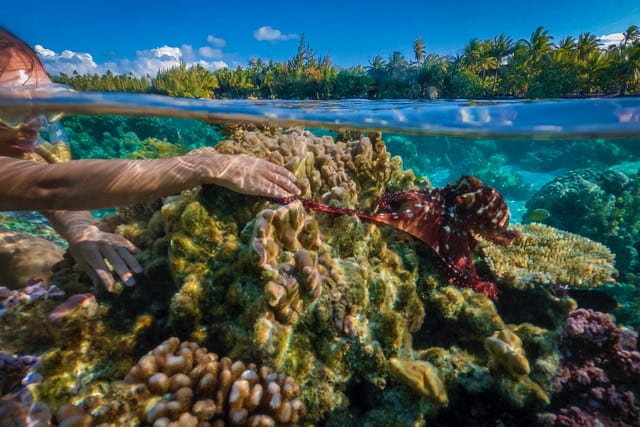 I could have spent all day with this magical enchantress, but my life exists a world away. I sent the deepest, utmost gratitude and chanted Nam Myoho Renge Kyo three times to bless and protect her as I said my weepy goodbye, my salty tears merging into the salty ocean. I will likely never see her again, and this brings me great sadness. But I feel blessed in knowing that our connection has been woven forever into the fabric of our souls. May you be touched by God’s tentacle someday.

Sierra Mercier - Sierra was born in Sun Valley, Idaho where she began a successful competitive figure skating career. Eventually she transitioned to a career in the entertainment industry in Los Angeles where she met her loving husband. See more about Sierra at www.sierramercier.com.