The Reasons Why Men Suffer More After a Breakup 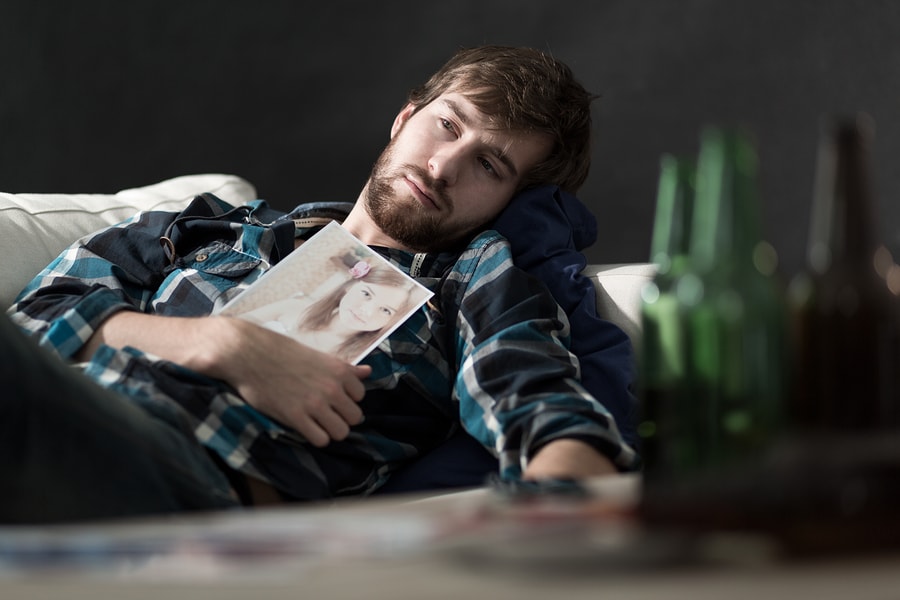 Throw the old stereotypes of men out the window.

Men get a bad rap in the romance department. Society has painted them as the unfeeling and detached sex — which is why lots of ears perked up when a new study about men and breakups emerged from Binghamton University and University College London this summer.

For the study, researchers surveyed 5,707 men and women, with an average age of just under 27 years old, from 96 different countries. The findings: Women experience more emotional anguish in the aftermath of a breakup, but it takes men longer to recover.

In fact, the researchers note, men never fully get over their breakups. Instead, they tend to eventually just “move on” to the next partner without resolving the issue of what went wrong in the previous relationship. Since the study explained the results from an evolutionary perspective, the researchers guessed it was because women tend to invest more in their relationships than men — because each relationship a woman enters could lead to a nine-month pregnancy and many more years raising a child. In this line of thinking, since women are wired to be choosier, the loss is more profound with the departure of a high-quality match. On the other hand, since men historically have had to compete for the attention of women, it may take them longer to realize what they’ve lost, that they aren’t finding a woman who compares to their ex, and that she’s perhaps irreplaceable.

That’s one theory, anyway. But there’s definitely more to breakups than the ancestral explanation, according to research and experts in the field. And while today’s man is still biologically wired to be the hunter-provider type, the male sex has adapted to take on a more complex role, says psychologist Karla Ivankovich, an adjunct professor at the University of Illinois, Springfield.

“In the past, emotion did not serve a purpose in providing for the family,” she tells Yahoo Health. “It was not beneficial to getting things done. But today, men are likely to be involved in all facets of a family, engaged in their relationships, nurturing, and rearing.”

How Do We Recover From Breakups?

A lot of factors that generally influence the impact of a breakup of heterosexual couples (on which we have the most research) are not sex-specific. There is no cookie-cutter approach for how men and women each handle breakups, says Art Markman, professor of psychology and marketing at the University of Texas at Austin. “Many factors have less to do with gender than with other behavioral tendencies that are correlatedwith gender,” he tells Yahoo Health.

Take rebounding as a coping mechanism after a breakup. The success of rebounding has to do with resources and options available, says biological anthropologist Helen Fisher, the chief scientific officer at Match. “A man who is young, incredibly good-looking, with money, is going to have a lot of options and will probably recover a lot quicker than someone who doesn’t,” she tells Yahoo Health. The same concept applies to women.

Also factors: How invested you were in the relationship and how important that relationship was to other aspects of your life (say, if you really wanted children and you were hoping for that partner to be the mother or father of your child). “If a person knows they were just in it for the short term, the breakup will not be as difficult,“ notes Marisa T. Cohen, an assistant professor in the Department of Psychology at St. Francis College and co-founder of the Self-Awareness and Bonding Lab.

So there’s no question about it — there are many variables at play for how someone will take a breakup, regardless of gender. But there are a few reasons a man might take a split harder in the long term compared with a woman, experts say. Let’s explore the theories.

Theory No. 1: Women Initiate Most Breakups

The question of who takes it harder may be less “man versus woman” and more “dumper versus dumpee.” According to the Binghamton study, the rejected parties experienced more “post-relationship grief” (though grief was still severe for both halves).

Here’s why that matters: More often than not, women are the initiators of a breakup. This was true in the current study, and Fisher says she’s also found this to be the case in her own research. Why, exactly, is tough to say — especially since the Binghamton study notes “other” was frequently selected as the cause of a split, showing that there is no single, common reason for breaking up.

“If women are the ones doing the breaking up, then they are already taking the time they need to emotionally divest from the relationship while they’re in it,” Ivankovich tells Yahoo Health. “So it may be that men are caught off guard by breakups — and then, loss is loss. Whether it’s death or dying, the loss of a job or relationship, you still go through the stages.”

And privately coming to terms with a relationship’s inevitable end is decidedly easier when your partner is still around, something both parties don’t usually have the luxury of experiencing. “Breakups are rarely mutual,” Cohen says. “Based on Diane Vaughan’s research on the process of uncoupling, the initiator is the first person to express displeasure with the relationship and want out. He or she goes through the process of experiencing single life, and potentially finding another partner, from the secure base of the relationship.”

When the partner is finally clued in to the fact that the relationship is ending (or over), this person is forced to move on abruptly and alone. “This makes the healing process much more difficult for the partner,” says Cohen. “The initiator can enact preemptive strategies while in the current relationship to ease the transition from one partner to another, but the partner can’t.”

Cohen says there’s a good chance the initiator has already taken a look at the relationship market long before they put themselves back on it.

Theory No. 2: Men Are Wired to Handle Breakups Differently Than Women (and May Lack a Solid Support System Postsplit)

The Binghamton study took a look at breakups from the evolutionary perspective, so let’s do the same now — because men and women arewired differently. They have long had different goals for relationships and different ways of dealing with the aftermath. Some of those strategies are more or less ingrained in our psyches.

From an evolutionary perspective, Ivankovich says, the emotive woman often looks at a breakup as a problem to be solved, whereas the logic-oriented man looks at the same breakup as a problem that has already beensolved. As such, the emotional process for each is different. For men, the breakup is the end. For women, the breakup is the beginning of a larger psychological dilemma.

“If a male has no option, because she has broken up with him, the way he adapts to the situation is to move on,” Ivankovich says. “Men are not relationship analyzers, so the next relationship is seen as a do-over. Because women are emotionally tied to relationships as nurturers, any time things go awry, a woman will analyze the situation to determine what she ‘coulda, shoulda, woulda’ done differently, to be able to move on.”

Which brings us to the value in rehashing the relationship postsplit: It’s effective in the short term to realize personal lessons and resolve what led to the relationship’s demise, Fisher says. (Though, there will eventually come a time when talking about what went wrong in a relationship will just prevent you from moving on, Fisher adds.)

But while a common problem for women is dwelling more than they should after a split, men have the opposite problem. “Vulnerability isn’t an adaptive thing for men,” Fisher says. “They are naturally predisposed to suffer in private. Women talk too much, men probably don’t talk enough.”

Historically, men just aren’t encouraged to express their emotions to male friends like women are with their female friends. “If a man was to call his friends up, crying about the end of a relationship, he would be treated very differently than a woman,” says Cohen.

On top of that, after breaking up, men may look around for their “guy squad” and realize it doesn’t exist. Interestingly, Markman says women often have more close friends than men and are more likely to keep their friends when they are in a relationship. Men often spend less time with their pals, which could ultimately put guys, who are already less likely to communicate with their peers than women, in an even worse position.

“The stronger a person’s social network, the better that person is able to deal with the fallout of a breakup,” Markman says. “So, a big reason why men often have more difficulty recovering from a breakup than women is that it takes them longer to re-establish social ties that will allow them to deal with the emotional difficulty of the breakup.”

Millennial-age men are more emotionally intelligent than their forefathers, Ivankovich says. “They ‘feel’ like no generation before them.”

Finally acknowledging that men actually have post-relationship needs, and encouraging them to access those deep emotions rather than brush them off, is only a positive thing. “People who have trouble talking about emotional topics will have trouble really understanding what happened and what went wrong,” Markman says. “In addition to being able to ‘get over’ a particular relationship, it is important for people to learn from breakups so that their next relationships are better and stronger. Anyone who does not deal with a past relationship is likely to make the same mistakes again in a future relationship.”

The Reasons Why Men Suffer More After a Breakup