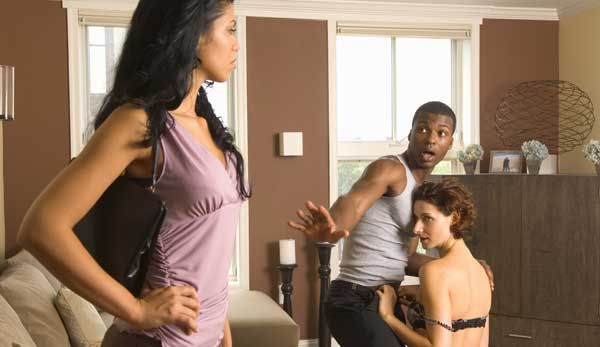 Why do cheaters cheat? New research has uncovered some truths about infidelity that could surprise you. Did your partner cheat on you because her mother was a cheater? Is there really a most popular day to cheat? Read on to find the answers:

If you’re the cheating kind, you may have your genes to blame: Researchers from Binghamton University found that about half of all people with the DRD4 gene — also known as the “thrill-seeking” gene — were more prone to promiscuity and unfaithfulness.

Bad news for men who sound anything like Barry White. A study published in the journal Personality and Individual Differences showed that women perceive men with deep voices as being more likely to cheat. Researchers asked women to listen to men’s voices and determine which guys were prone to cheating. Researchers then asked which men women were most attracted to for long- and short-term flings. The verdict? Men with deep voices were seen as being more suitable for a fling and more likely to stray.

The way you react to being cheated on might be a result of your political beliefs. In a YouGov poll commissioned by The Huffington Post, 14 percent of Democrats versus 10 percent of Republicans surveyed said they would definitely give their partner a second chance if they discovered an affair.

Affairs don’t just break hearts, they might also break penises. Dr. Andrew Kramer, a urologist and assistant professor of surgery at the University of Maryland Medical Center, studied 16 cases of penile fracture between 2007 and 2011 that required surgery. Half of those men admitted to fracturing their member during an extramarital affair. “I think the time you don’t see a lot of men fracturing their penises is in the bedroom with his wife that he’s been married to for a number of years,”Kramer explained to the Huffington Post

When it comes to cheating, it’s not all about looks. Extra-marital dating site Victoria Milan polled over 4,000 of their members and found that most cheaters considered their significant others to be more attractive than their affair partners.

And in another blow to cheating men everywhere, a study out of the University of Florence suggested that “sudden coital death” is more common when a man is getting it on with his mistress in an unfamiliar setting than when he’s having sex with his spouse at home.

A survey by Illicit Encounters — an extra-marital dating site based in Britain — polled 2,000 members and found that 73 percent of women who admitted to having an affair had mothers who cheated as well. Apparently, the unfaithful apple doesn’t fall far from the unfaithful tree.

Chain restaurants and steak houses came out on top when extramarital dating site Ashley Madison asked roughly 43,000 of their users where they take their dates to dinner. Morton’s The Steakhouse was the most popular choice. The Cheesecake Factory and Ruth’s Chris made the list, too.

Be careful with those heart-eye and winky face emojis if you’re in a relationship. The website Fusion recently asked 1,000 18- to 34-year-olds if they thought “online flirtations or relationships” counted as cheating, and 82 percent said yes.

They don’t call it “hump day” for nothing: Wednesday, between 5 and 7 p.m, is the most popular day and time for people to cheat, according to dating site Ashley Madison.